It’s here that Ana works on her style podcast Layers, or her newsletter London Review of Looks, sporadically-sent missives about the fashion of the streets, or on longform articles for a number of publications or on the bones of a novel set in the Royal Opera House. When the work is done she’ll settle in for the evening with her partner, a steaming dish of spaghetti meatballs and a bottle of wine.

We visited Ana on an unseasonably bright London afternoon to talk about writing, reading and why after a long day it helps to turn the radio up loud. 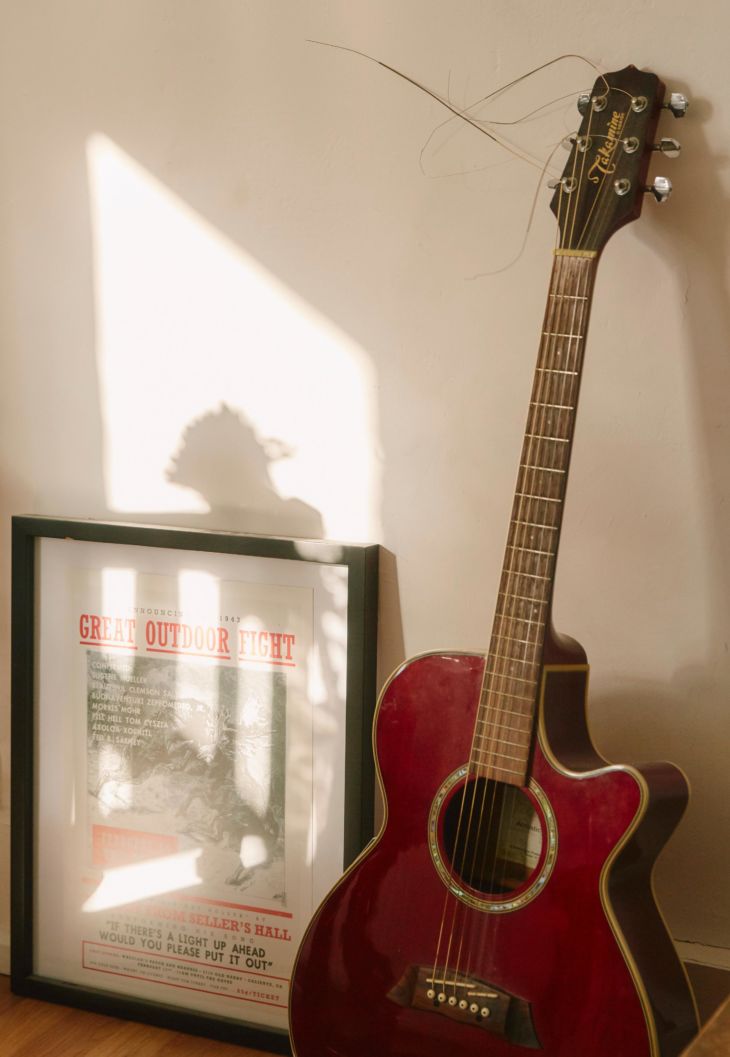 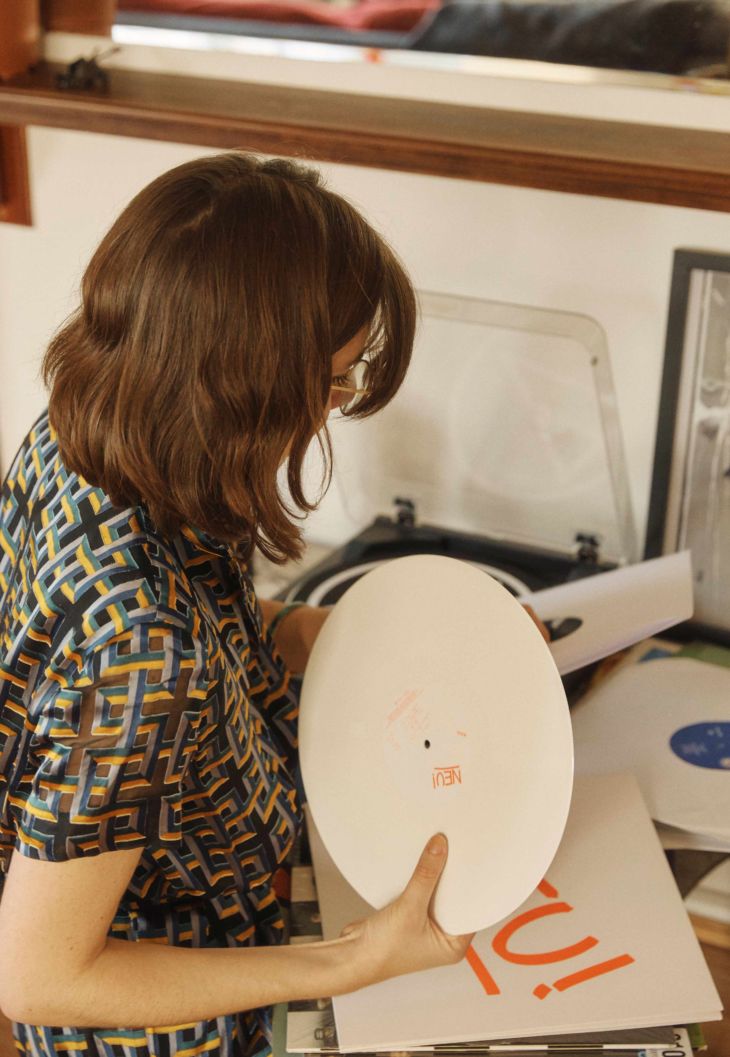 When did you move into your home and what drew you to it?

My partner Karl and I moved to our Camberwell flat earlier this year, after five years living north of the river in Kentish Town. I was looking for mansion flats and found this and was curious about it. We went to see it in the dark on a wet evening and were struck by its size and its high ceilings… We were surprised when we came back later, having already decided to take it, and found it was also light and airy and looked out over an absurdly pleasant park. 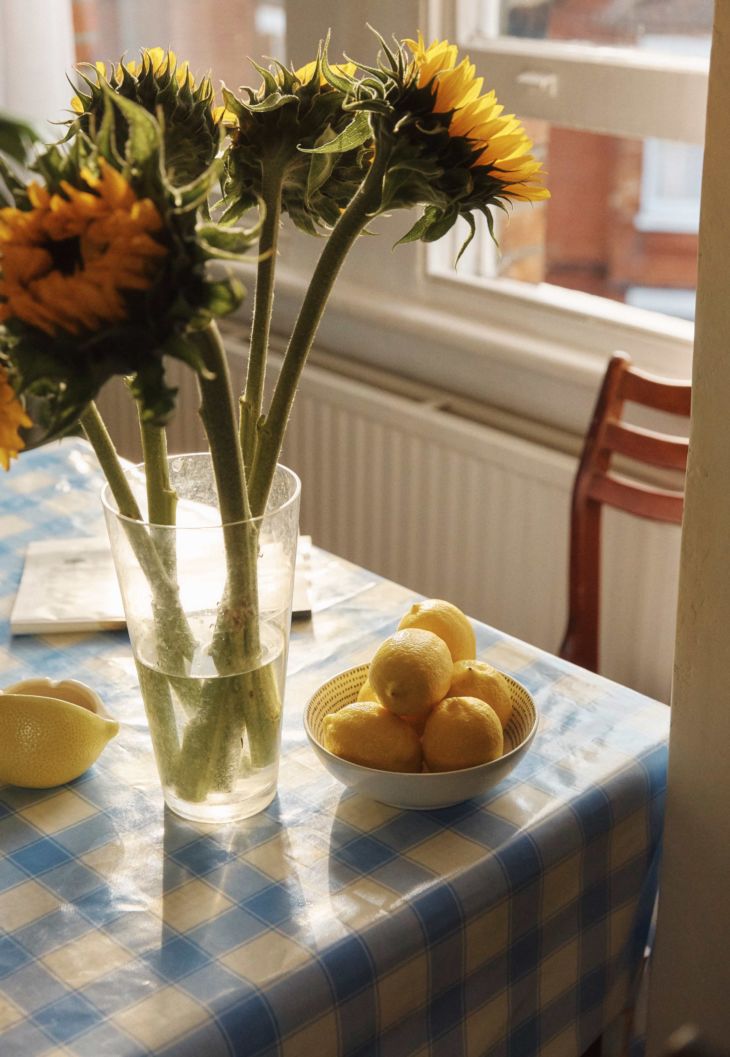 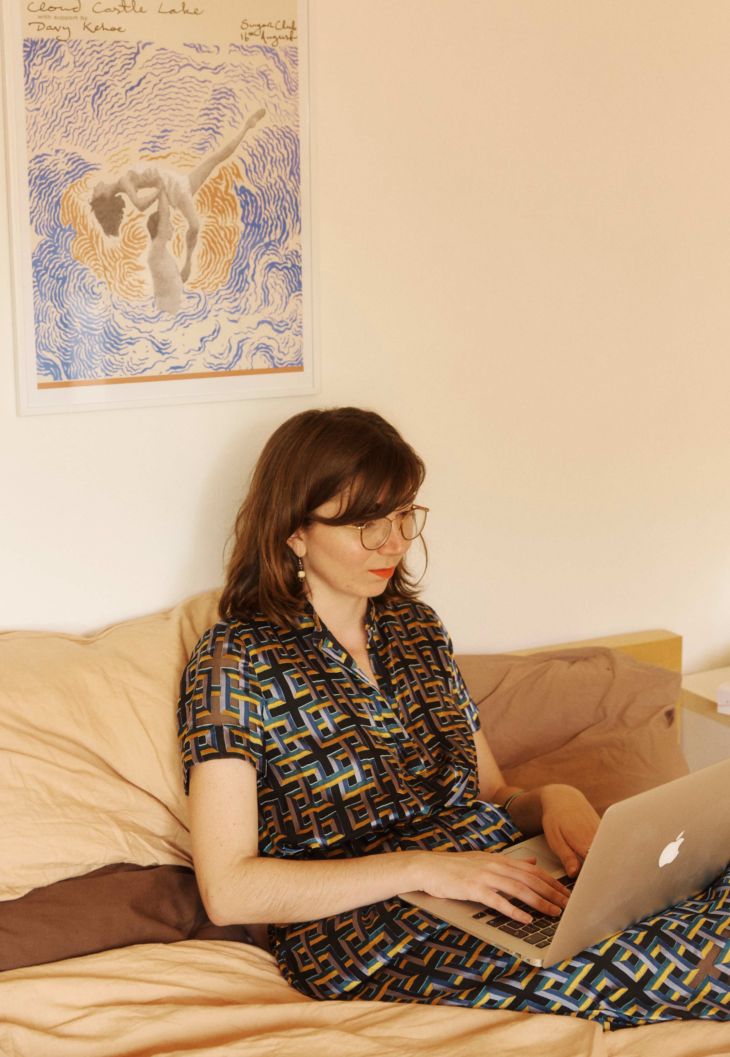 What do you love about living in South London in comparison to your old neighbourhood?

It’s so quiet here. I loved Kentish Town (close to Hampstead Heath and yet also just a quick meander into town) but this feels like a calm oasis in the middle of everything. I also love the river and was born in Fulham, where we lived in a terraced house on a street that backed onto the Thames Path. So I love that from here, it’s just a short train out to Barnes or Richmond for walks and pints by the water – my favourite way to relax on a Sunday afternoon.

Do you have your favourite neighbourhood haunts? Places to work with a cup of coffee, or grab a beer on a Sunday afternoon, or go for a run?

I’ve always ended up living in ‘betweeny’ places, neighbourhoods that are sandwiched in between more established areas. So I love that I can walk for a little while and end up at the wonderful Canton Arms in Stockwell, for a pint and a cheese toastie, but I can also cycle in the other direction to Peckham, where I have an office and where an afternoon writing can often turn into drinks in the railway arches or pasta (and a custardo for dessert) at Forza Win.

When we moved here I used my training runs to get out and explore areas further afield, by doing loops out to Clapham Common and Battersea Park. After 5 years in the same place, going to the same pubs and doing the same walks, it’s been fun to uproot ourselves and learn about a totally different type of London. 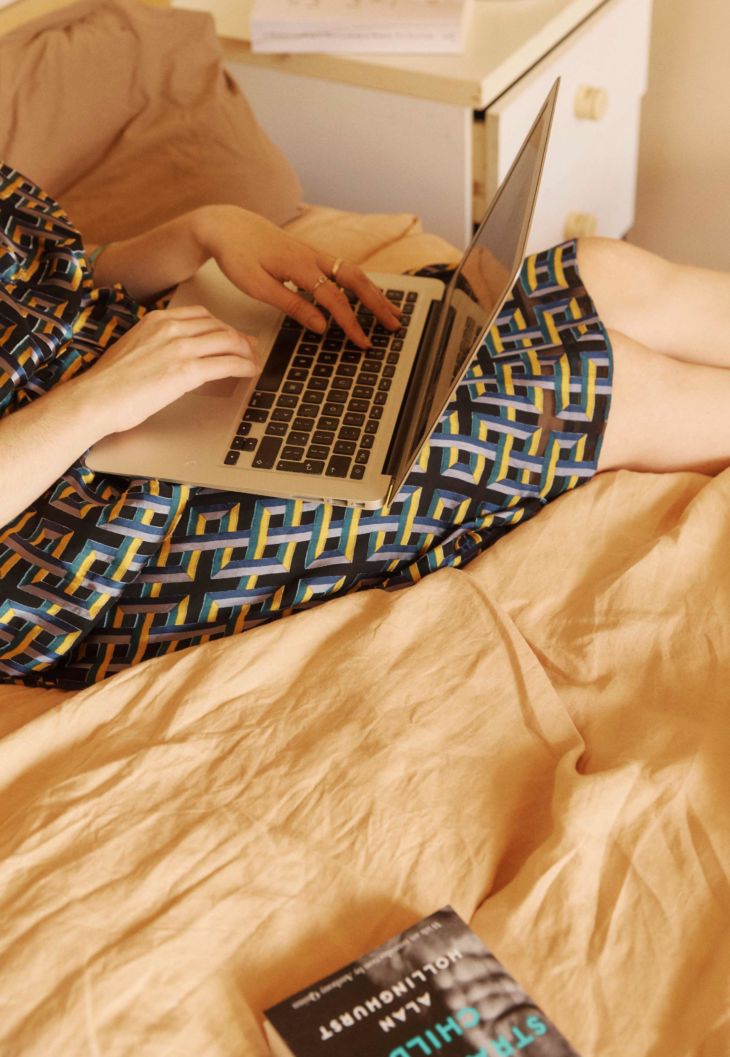 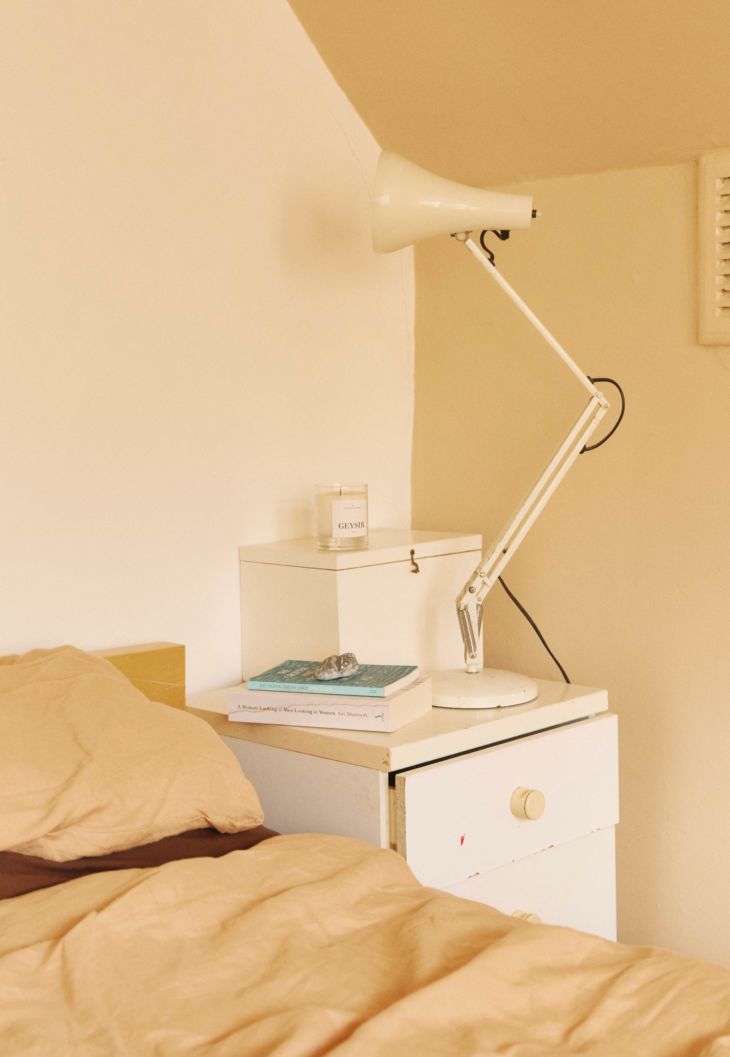 Our cosy linen bedding as featured in Anna's London home

What books are on your bedside table right now? What’s your favourite kind of book to read before bed?

I recently read The Crofter and the Laird by John McPhee and became slightly obsessed by the author’s relationship with daily life, place and his writing. In the 1960s he moved his young family to the remote Scottish island of Colonsay, where his antecedents were from, and wrote about what living was like there: the people of the island and the stuff of life there.

I particularly like writing that honours the role of location in our lives, whether it’s in sprawling emotive fiction (I’m thinking of London in Alan Hollinghurst’s novels, or Elizabeth Strout’s Maine) or life writing like McPhee’s or MFK Fisher’s. I think that’s something I always try to get down in my own writing – the fact that where we live forms the way we see the world, even if we don’t want to admit that.

I think that’s something I always try to get down in my own writing – the fact that where we live forms the way we see the world, even if we don’t want to admit that. 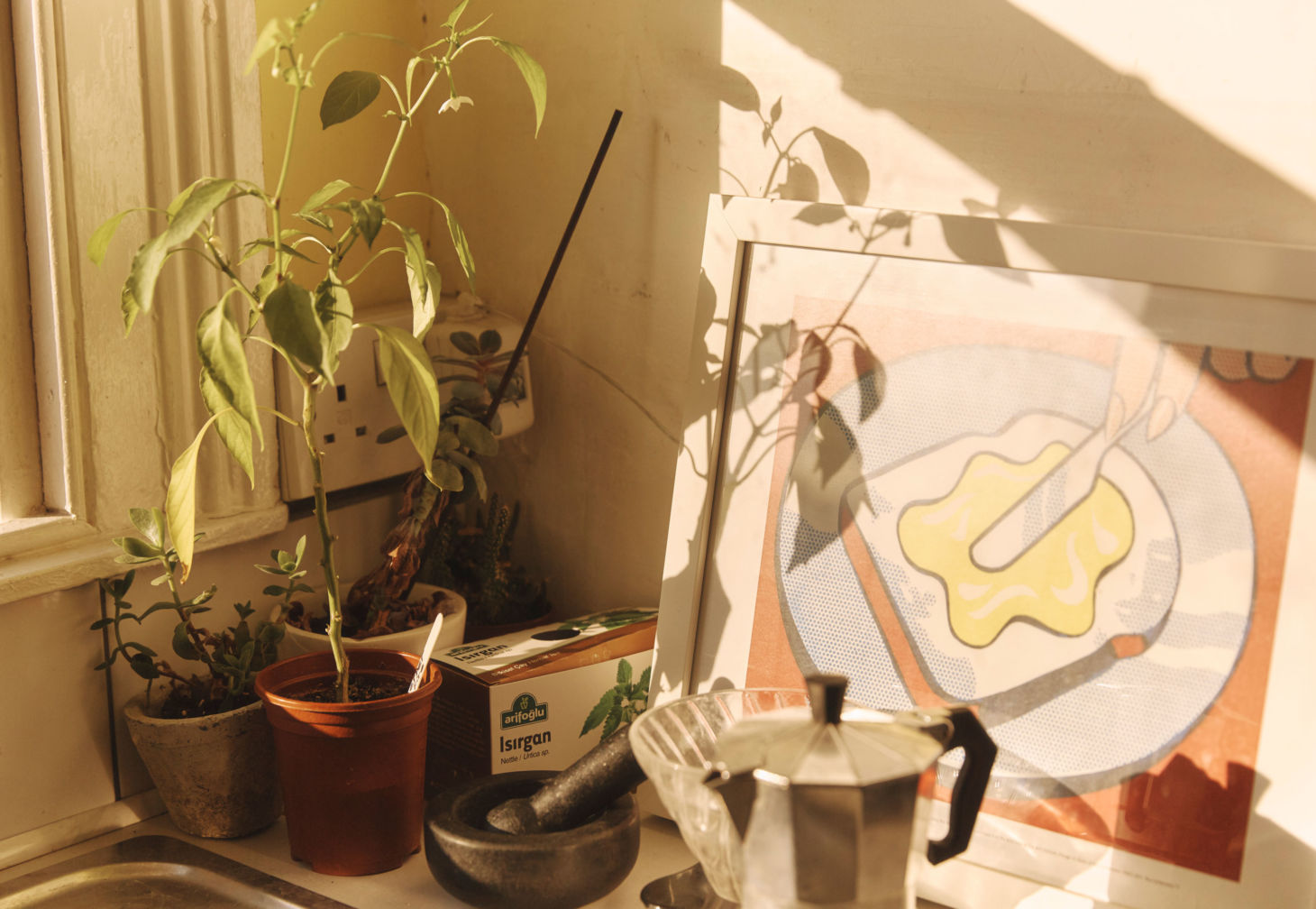 I wake up early regardless of what I’m doing that day, and if there’s time I read in bed with a cup of tea. I then always need time to sit and eat a proper breakfast, which generally involves a fried or boiled egg along with whatever else is in the kitchen. My current favourite is a runny-yolked fried egg on top of leftover carrot dal, from this Anna Jones recipe, along with the delicious pink pickle she suggests too.

What about a bedtime routine? What are nights like at your place?

If I’ve been out, the first thing I do when I’m home is turn on the radio. I like to cook when there’s time, but I am quite lazy and like to have something simmering while I read a magazine. I try to go to bed early, because I love bed, but I’m not a great sleeper so there’s a lot of chamomile tea and calming thoughts involved in a furious attempt to ‘unwind’. 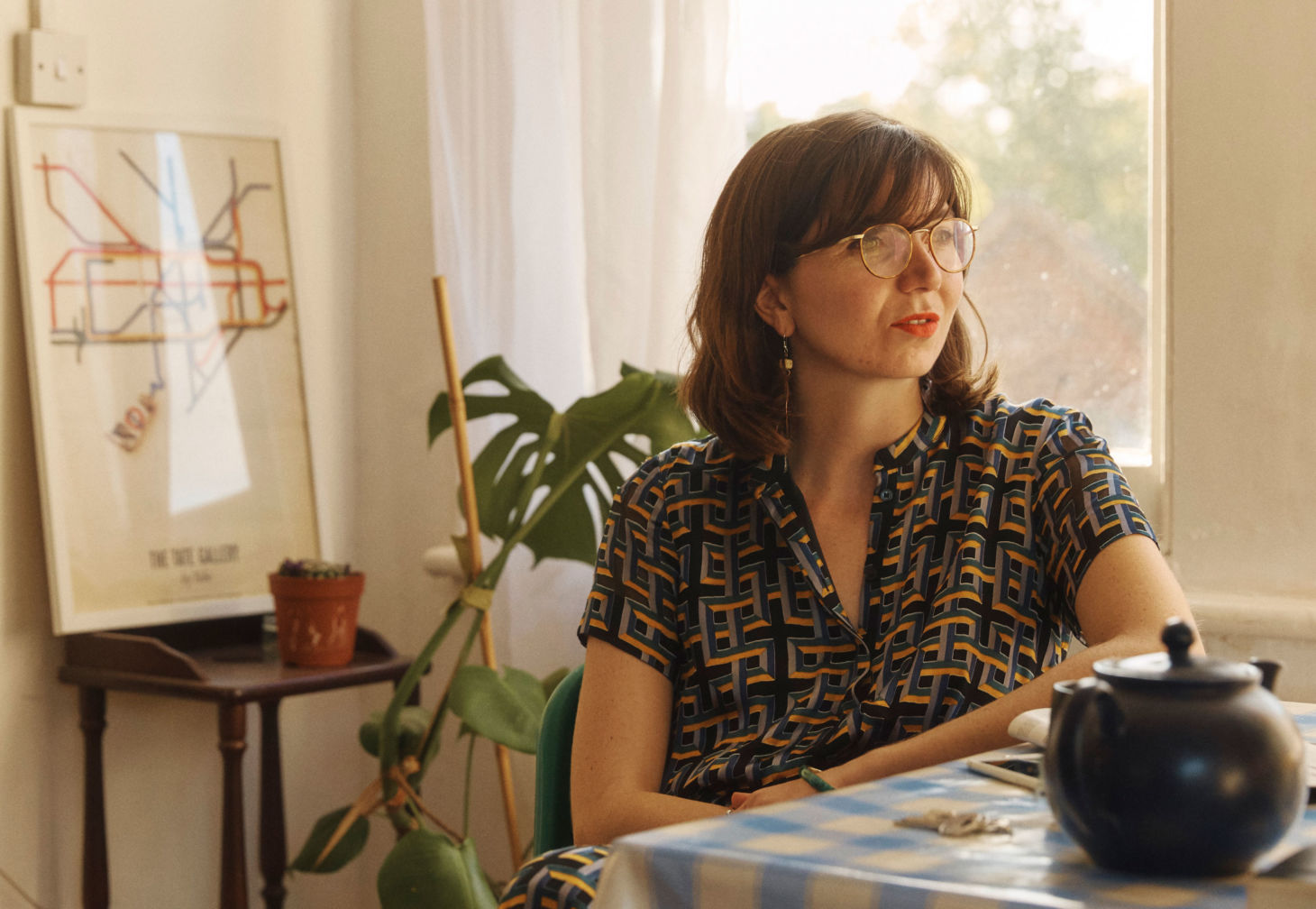 What is your favourite thing to do in your house?

Cook these meatballs and listen to the radio. Radio 4 in the morning and either NTS or Radio 3 in the evening. Then eat the meatballs with whomever we can fit around our little dining table with some wine and good chat.

A lot of people have (romantic, potentially) misconceptions about what life is like as a writer. So, what is life like for you as a writer? How do you structure your days?

If I’m not due anywhere in the morning I like to go to the gym where I lift small weights around the place until my brain feels satisfied with the effort. Then I come home, shower, and sit at the table where I eat and write at the same time for as long as I can. If this isn’t working, I go to my office or to the library – it really has to be somewhere I can eat and type concurrently, ideally while listening to piano music. I always have an afternoon slump when trying to write something big, so I try to time that with a trip to the supermarket for the ingredients for an ambitious dinner recipe.

However, I also have to pay the bills! I’ve worked all over the place as a journalist and a copywriter over the years and am so lucky in that I do find the work I do for money stimulating, and not so draining that I don’t have the energy or space to write as well. I know that in a city like London, that can be a challenge in and of itself. 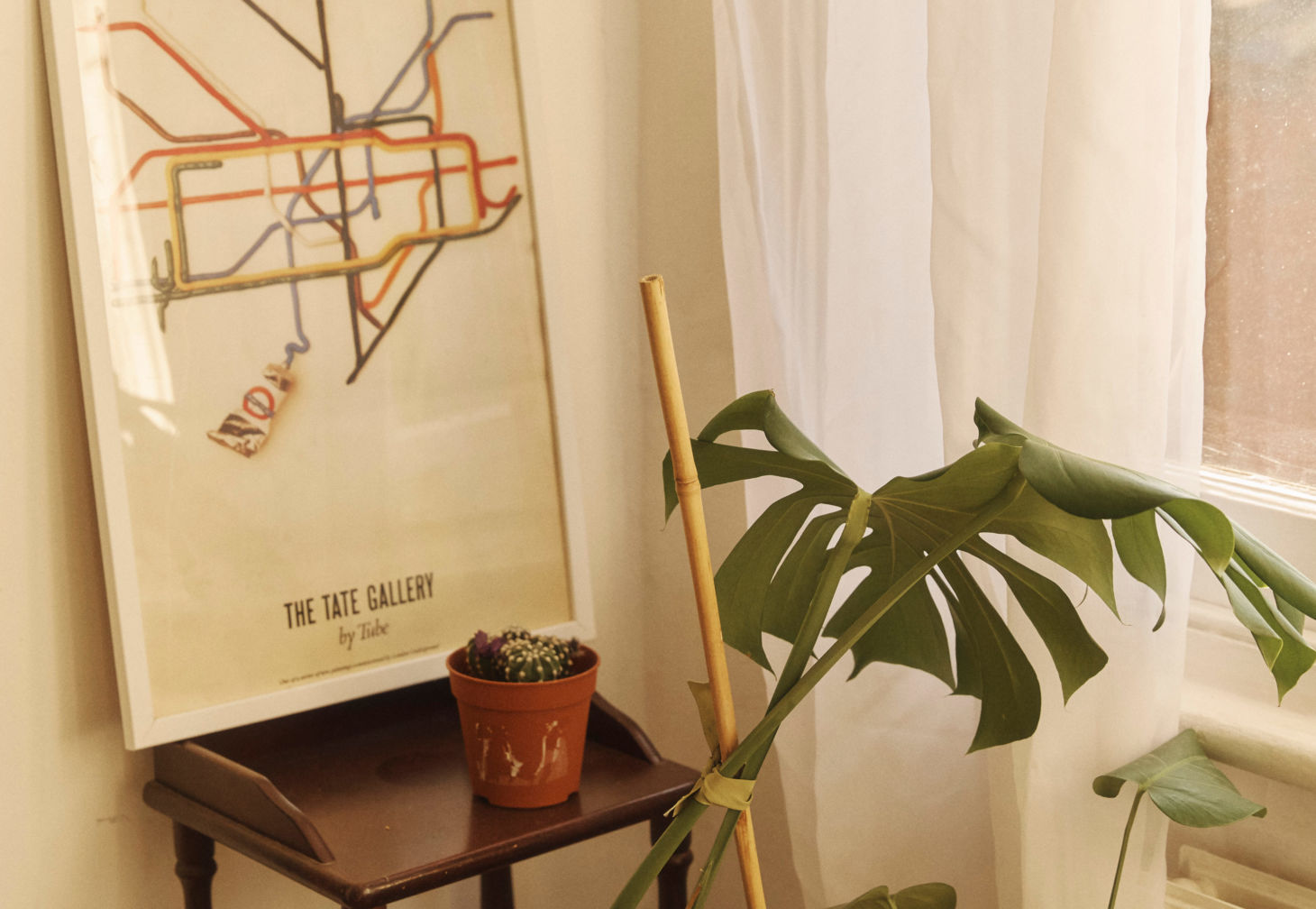 You write about fashion, send out newsletters, record a podcast and also write fiction… how do you juggle all your creative pursuits?

I’ve always found it fulfilling to have projects of different lengths running at the same time. Please note that I try to write fiction – while I worked at a fashion magazine for several years, I wrote a novel on the weekends, which I later put in a drawer, never to look at again. I think I could describe the urge to do these things as a kind of compulsion. I can’t imagine not doing some kind of writing for myself in a way I find personally satisfying.

The London Review of Looks is written sporadically, whenever I have a moment of feeling really in tune with the choreography of the city in some way. Sometimes you see something that is just so perfect – thinking of what Jane Jacobs wrote of as “the intricate ballet” of the city street – that you need to share it. Life would probably be more straightforward for me if I didn’t have the need to write these things down and to share them, but then, it wouldn’t be as enjoyable, either.

The London Review of Looks is written sporadically, whenever I have a moment of feeling really in tune with the choreography of the city in some way. Sometimes you see something that is just so perfect – thinking of what Jane Jacobs wrote of as “the intricate ballet” of the city street – that you need to share it.

What’s next for you? What are you focussing on right now?

I’m trying to find the time to finish another novel, which takes in ballet at the Royal Opera House, motherhood and Irish identity in London over the years. So far it has involved a lot of research and reading, which is a treat – as long as I live here, I want to be learning more and more about how the city unfolds itself over time, and what that means for those who live here.

Word & Images by Hannah-Rose Yee “If you were born in 1991 you’ve never known a time when pregnancy wasn’t performed in public. 1991 was the year in which Demi Moore appeared naked, seven months pregnant with her second daughter, Scout, on th...

Analiese Gregory's toasted-sandwich game is stronger than most.