With a front door that opens up to the Auckland harbour, Devonport-based ceramic artist Holly Houston admits she doesn't recognise the smell of salt water, as she has never had to live without close proximity to the ocean. Inside one of eight joint flats, a space Holly describes as a "modern commune", lives Holly, her boyfriend Chris and their 4-year-old daughter Willow. Their home, speckled with afternoon light and infused with the scent of fresh bone broth, is enlivened with Willow's energy. While we catch up over Rooibos tea, Willow makes us hot "cafe" soup with her felt vegetables in a wooden letterbox... 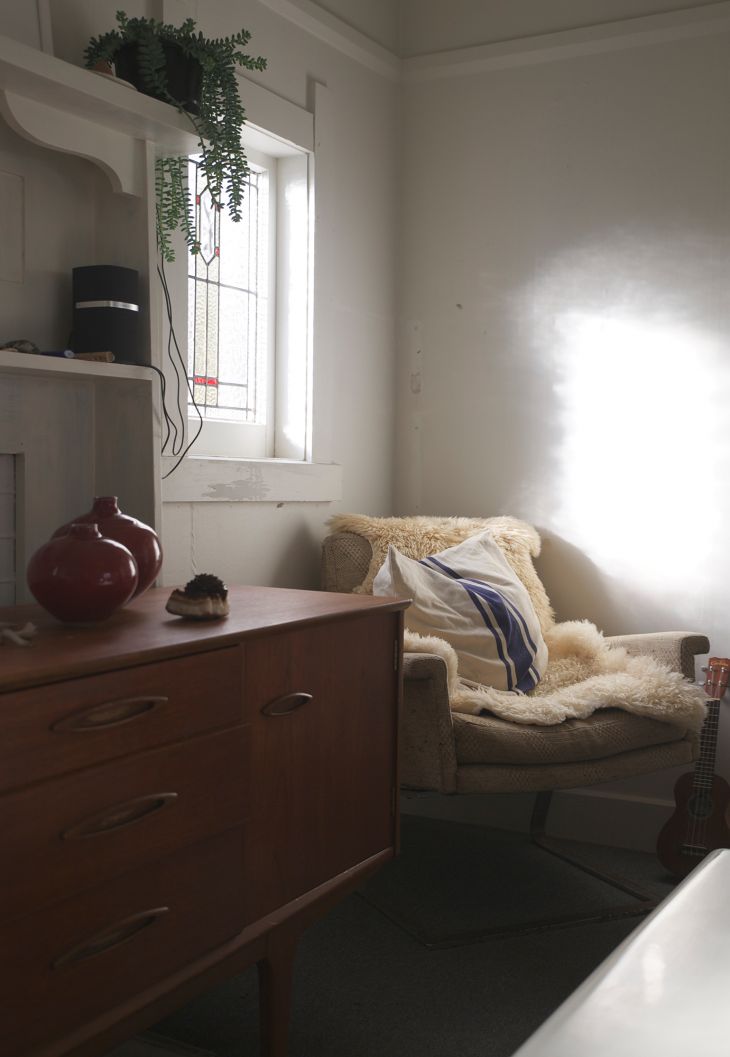 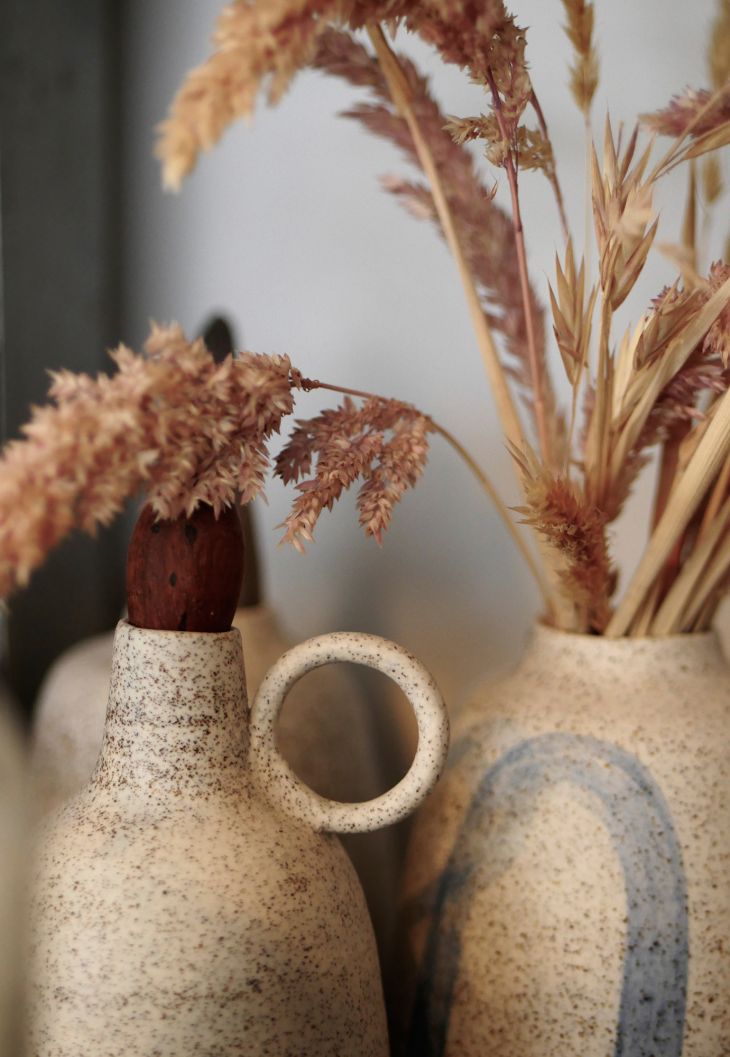 What do you love about living in Devonport?

We both grew up here. Chris spent his whole childhood in a beautiful old Villa with a plum tree in the back garden. My mum is a bit of a gypsy, I had lived in about ten houses by the age of ten.

Over the years it’s become really gentrified – probably like most of Auckland! But we won’t be able to afford to live here for much longer, all of the friends we grew up with have moved away.

We are so lucky to have our little home though, it’s one of the only affordable spots left in the north shore. It’s a bit of an institution, everyone I know has either lived here or knew someone who lived here. It was originally a huge old servants quarters for the local manors, and it’s had many incarnations since then, including a brothel and a commune. These days it’s a special little block of flats, our daughter and one of the other little girls who lives in the building are sometimes known to yell greetings to each other out their bedroom windows at dawn! 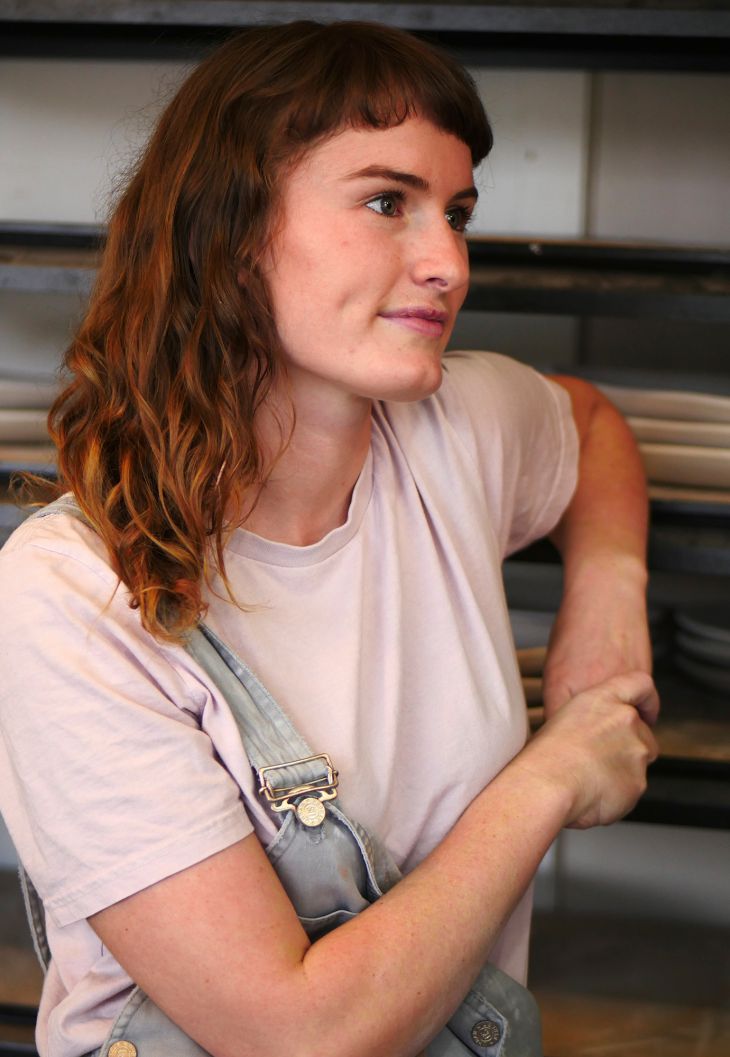 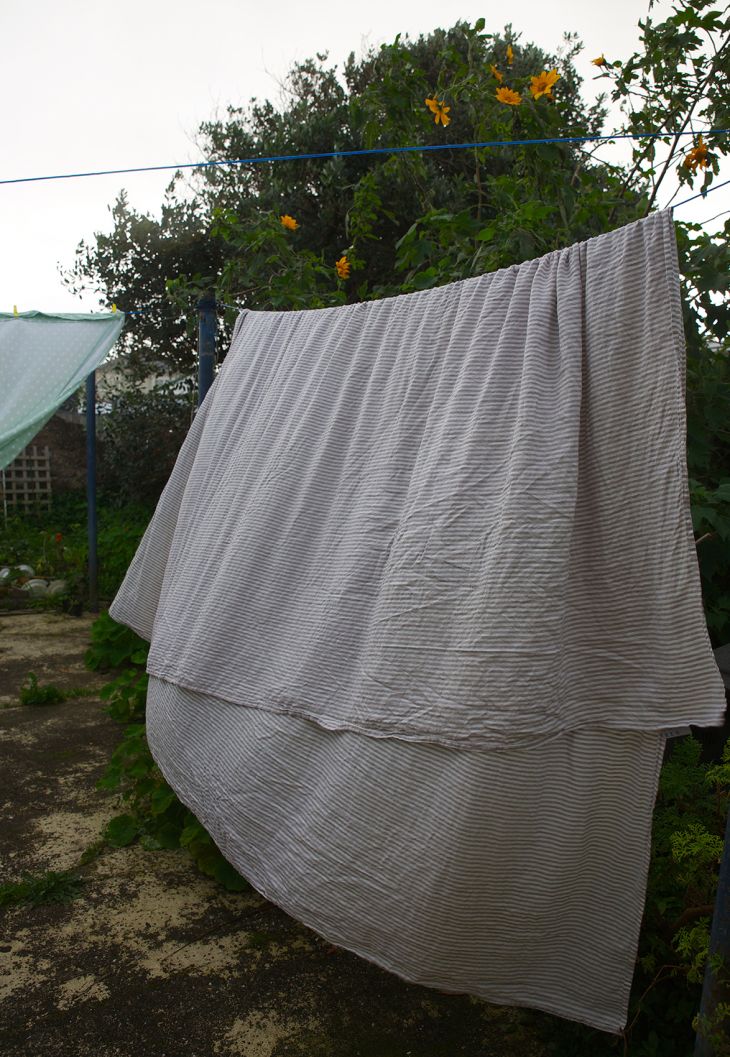 Out to dry: IN BED stripe linen Flat sheet

What are some of your favourite local spots?

My favourite thing to do on a sunny morning is head to the local french pastry shop, get coffees and almond croissants, and walk around the corner to Cheltenham beach.

Even in the winter we get a fair few crisp sunny days (never quite enough for me) and being by the sea, when it’s still, makes the colder seasons more bearable for me.

Once Willow has finished her fluffy (babycino) she uses the little cup and spoon to make sandcastles and we often collect sticks and shells to make tiny huts for beach fairies.

My favourite thing to do on a sunny morning is head to the local french pastry shop, get coffees and almond croissants, and walk around the corner to Cheltenham beach. 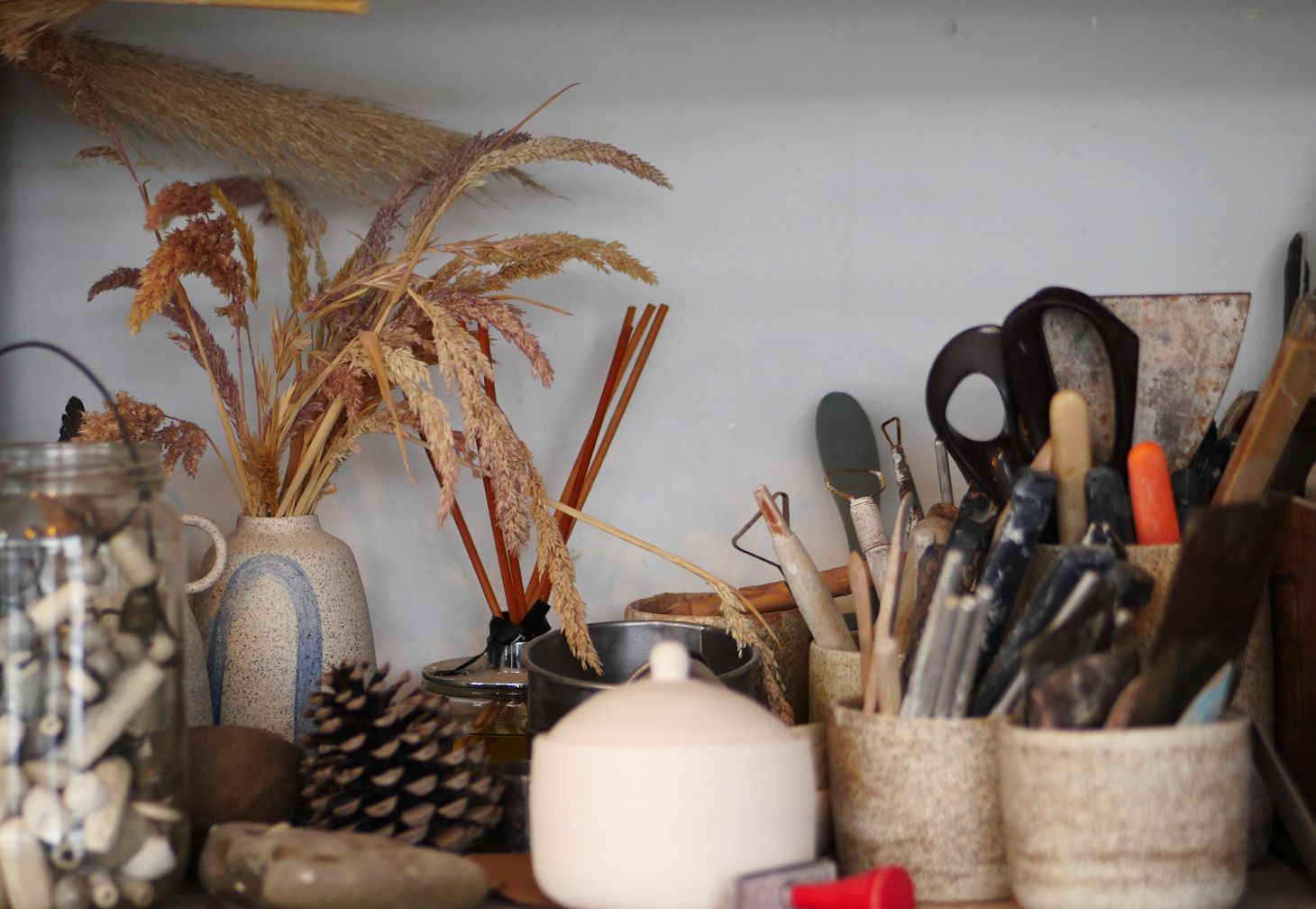 Can you tell us about some of your favourite pieces/objects in your home?

My daughter did a painting for me at kindergarten the other week and asked her teacher to inscribe the words ‘Mum, a picture of the world if you get lost’ in the corner. I find these the most comforting words I have ever read.

I got this bronze bottle opener in the shape of a mermaid from a junk stall at the markets for two bucks which I love so much. I can’t really put my finger on what it is about it, maybe the weight of it.

I also really love our himalayan salt lamp, it’s massive and turns our whole lounge a glowy pink at night.

My daughter did a painting for me at kindergarten the other week and asked her teacher to inscribe the words ‘Mum, a picture of the world if you get lost’ in the corner. I find these the most comforting words I have ever read. 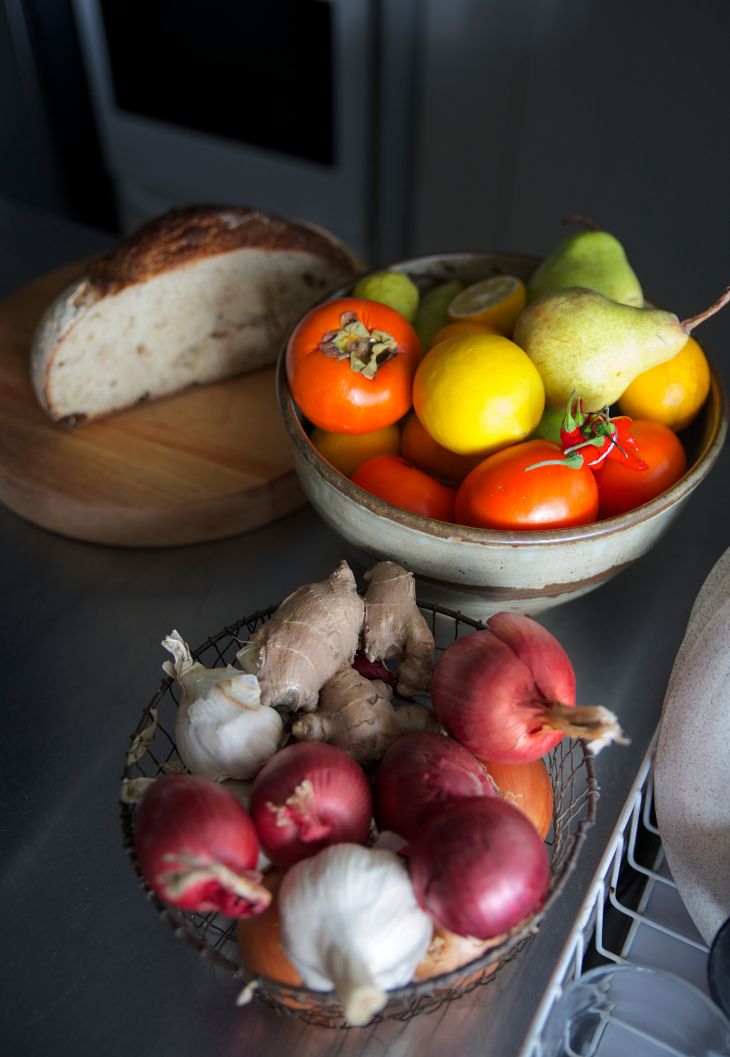 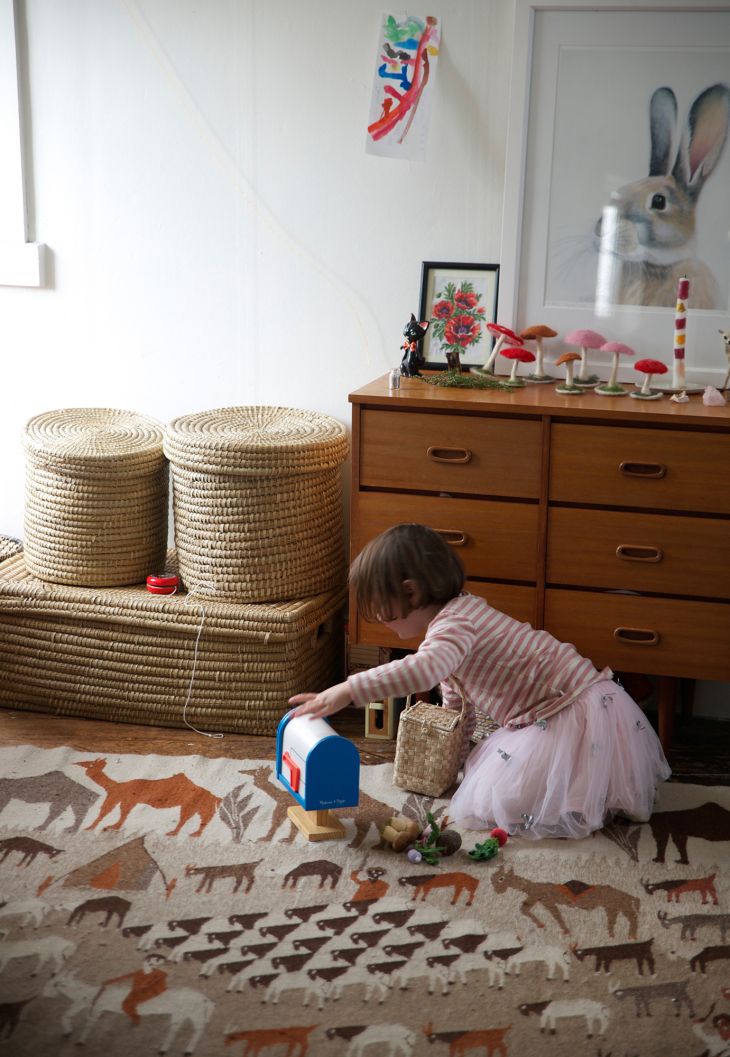 What is currently sitting in your kiln?

My kiln is empty today waiting for a giant coil pot I made yesterday to dry. Pottery slows down even more in the winter, the colder temperatures mean everything takes three times as long to dry. I’m hopeful that she will fit in the kiln, she’s the widest pot I have ever made. All my coil pots are women. 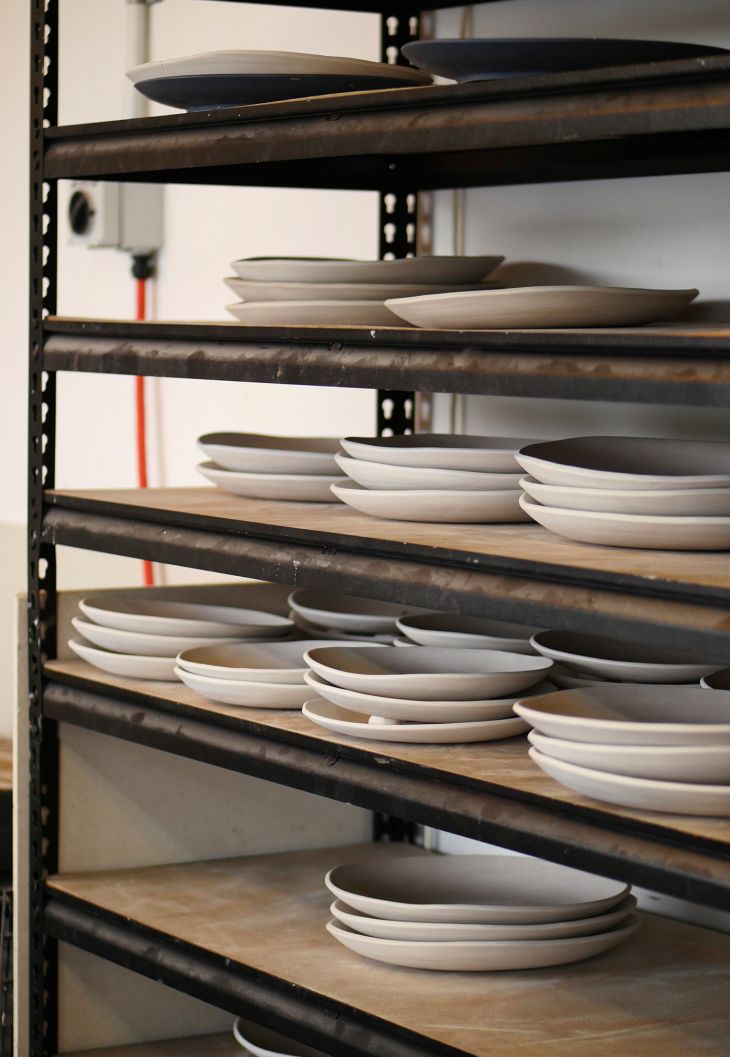 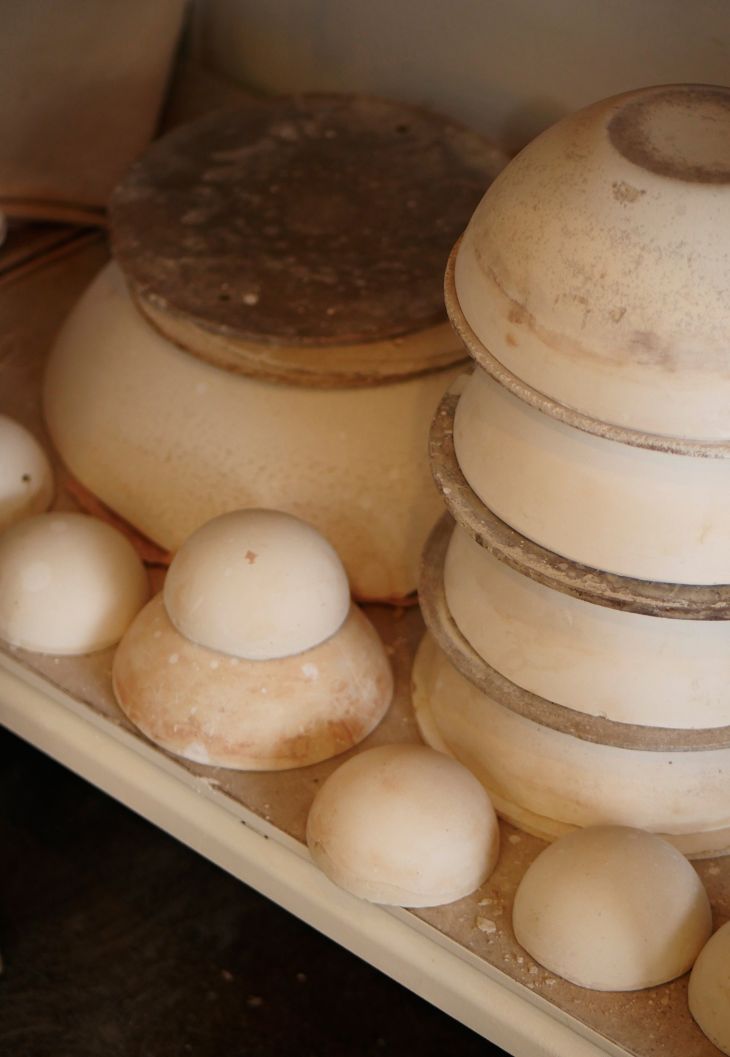 Can you tell us about a recent favourite request or project on the go?

I recently got to make a ceramic bust of a female waist for the new issue of the anyonegirl publication, which was such a treat.

I have done years of life drawing but never tried to make a three dimensional form. I have looked at photos of it since and been like “oh! no! if only I had made that come out slightly further just there!” – how frustratingly typical of me to critique the female form like that. Just like I’m trying to accept my own body that has birthed and nurtured a child, I am also trying to accept the body of work I have been making over the last few years. An ongoing process. 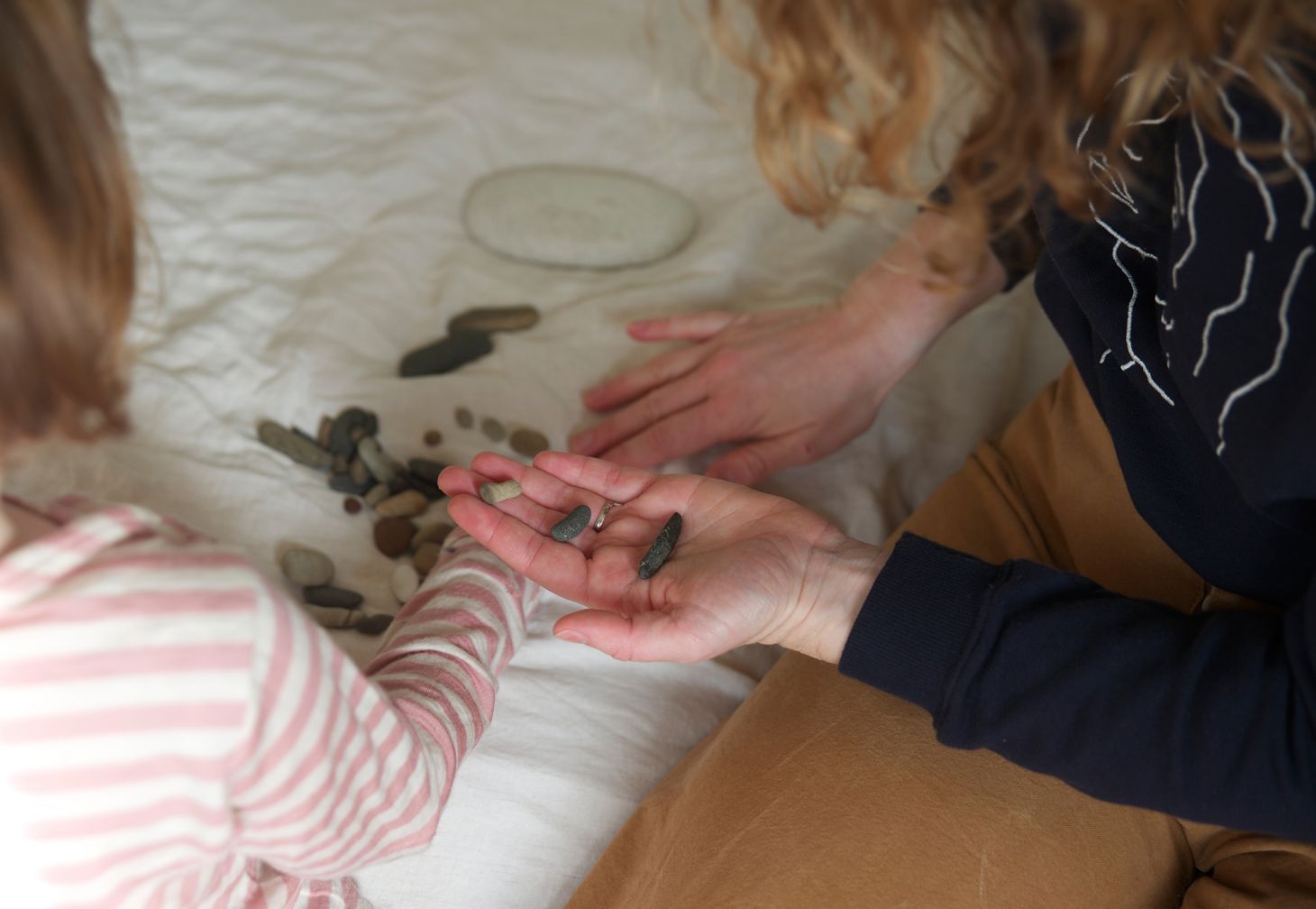 How do you like to spend your days off?

Every morning starts the same way for me, tiny fingers trying to pry my eyelids open. My boyfriend is finishing his degree at the moment so he usually has to study on our days off, so Willow and I get coffee and head to the produce markets, always making sure to stop past the gemstone and crystal guy to add to her collection. We visit friends or go to Willow's favourite place, the Auckland art gallery or Museum.

Every morning starts the same way for me, tiny fingers trying to pry my eyelids open. 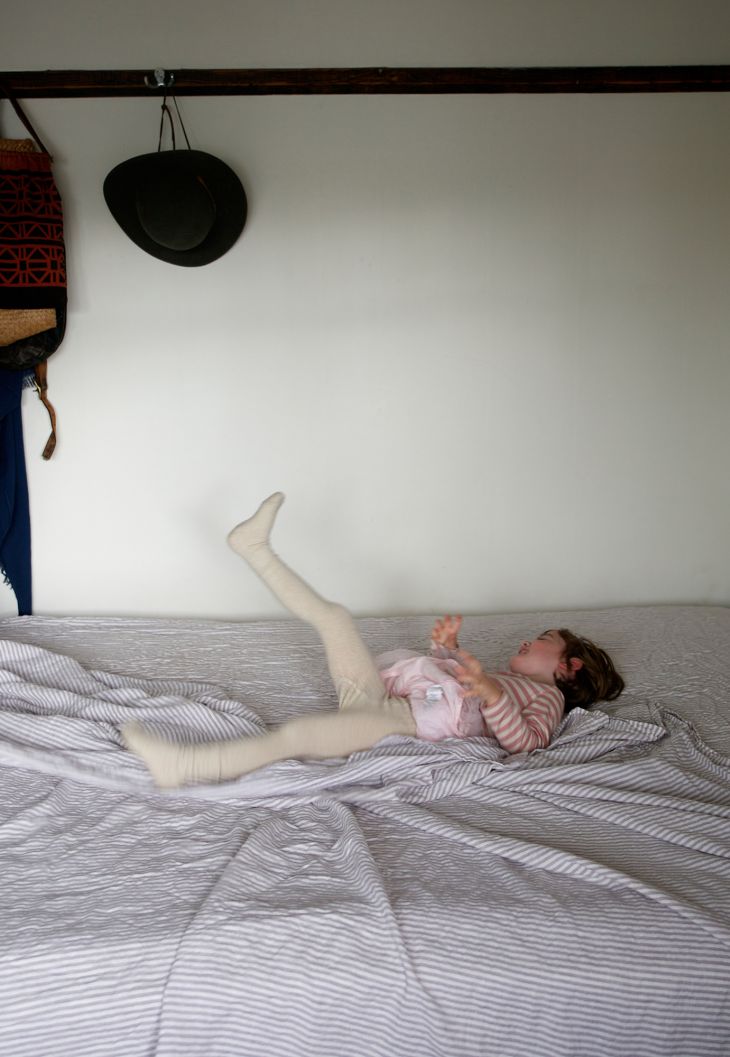 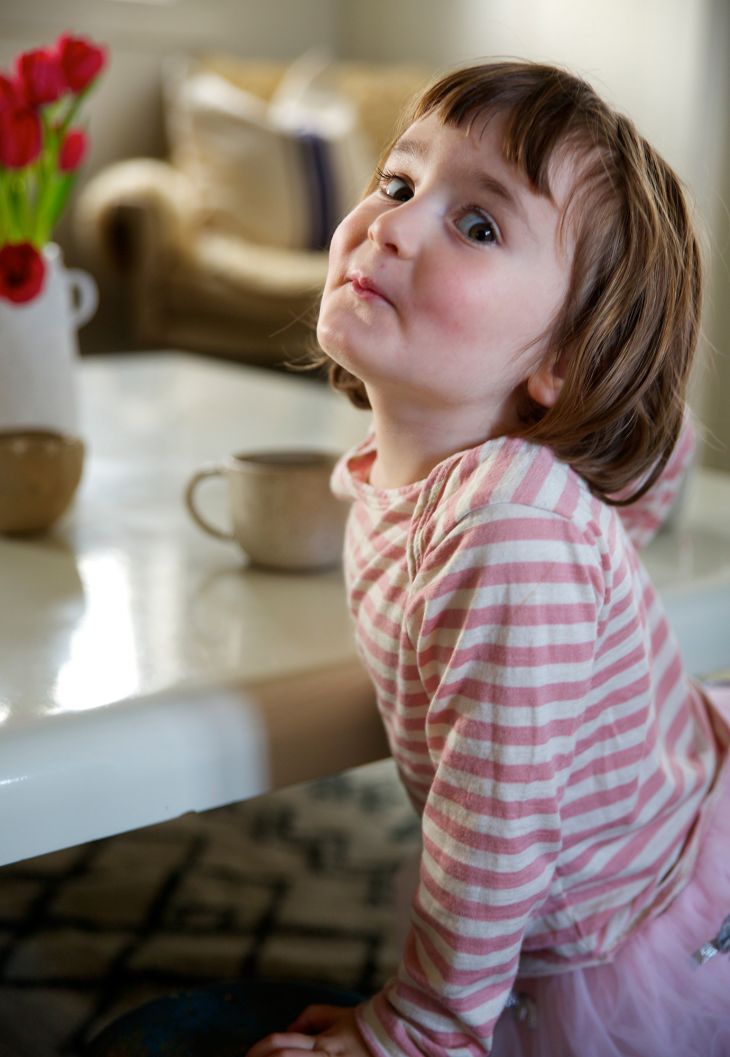 What is your bedtime routine?

I’ve been trying to create a healthier bedtime routine, it has previously consisted of wine and knitting in bed watching way too many episodes of Gilmore girls !

Lately, after I put Willow to bed, I change the music to something more mellow (she demands we play Queen every night as she falls asleep..) – I really like Aldous Harding’s new album. Then I do some really light stretching, I’m pretty hard on myself so I try not to get to wrapped up in the idea of ‘having a yoga practice’, I drink chamomile tea and bone broth before dousing myself in lavender oil and hopping in bed.

I still allow the occasional night to be lazy and drink wine in bed – last night we watched Bob Ross painting on netflix – I had never seen it before but it’s amazing! You have to watch it. 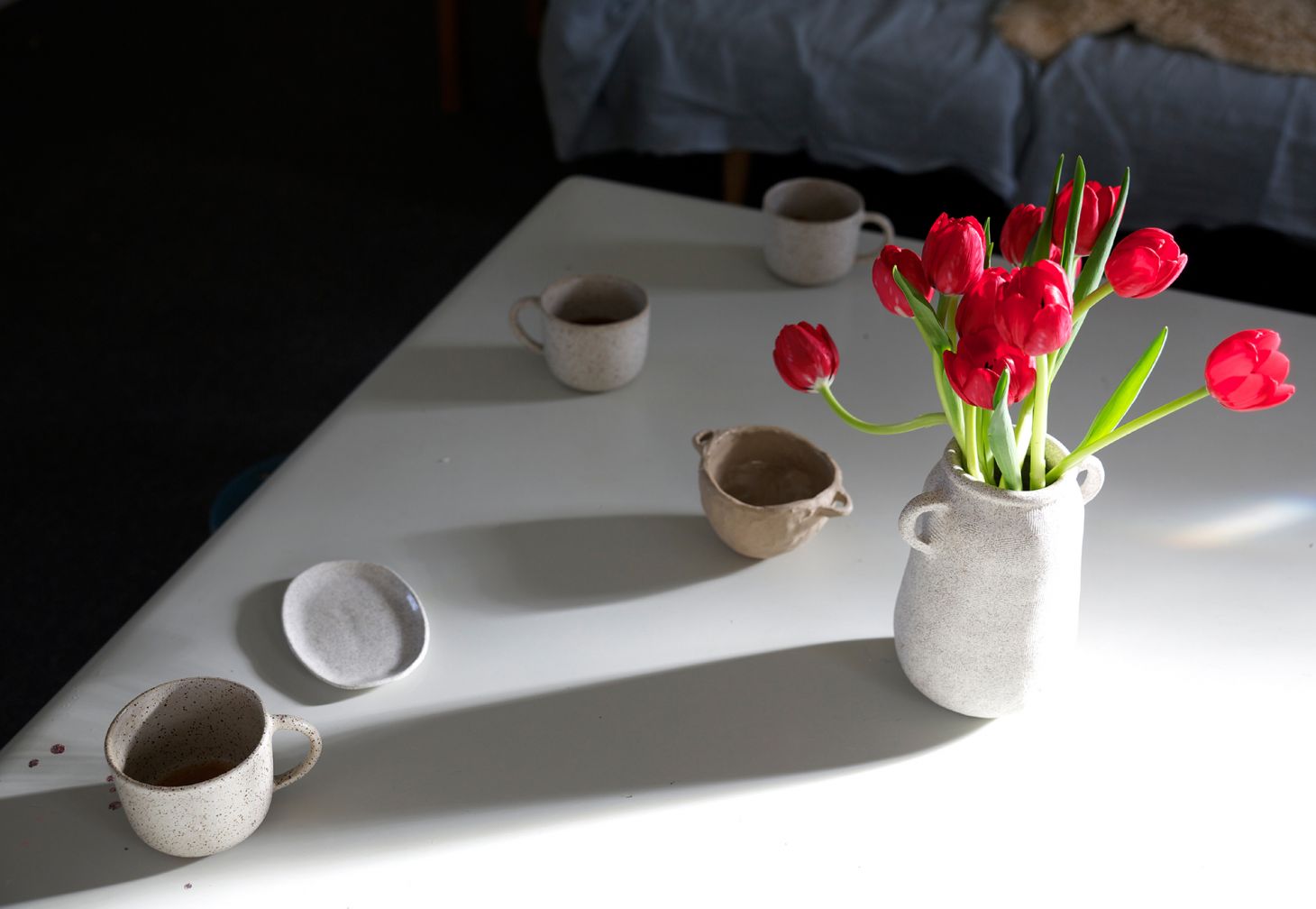 one hundred and thirty-four

A whole book about oranges, I can hear you groan. Why would I want to read that? Because did you know that Florida produces more oranges than Italy, Spain and Morocco put together? And that there's an Orange baron in the state worth more than $20 ...

We recently hosted Lunch Without Cooking - an EAT IN BED event, with some of our favourite Auckland-based makers.