Sarah is a creative director and interior designer, and her practice, Catseye Bay works on diverse projects from homes to pop-up spaces and exhibition design. Making the decision to name her business after a beach on Hamilton Island “is a bit cheeky” Sarah says. “My family holidayed regularly holidayed there when I was growing up. I remember how I was engaged by Catseye Bay’s tidal variation. At high tide we would windsurf, paddle and snorkel and hours later we would be walking across its sand floor. When I was naming my design studio, I reflected on how these experiences had informed my approach to design, why I find designing exciting -- how amazing that you can ‘just add water’ or take it away and transform the space of a bay. I’m experimenting with the dynamic interplay of business––and pleasure in Catseye Bay.” 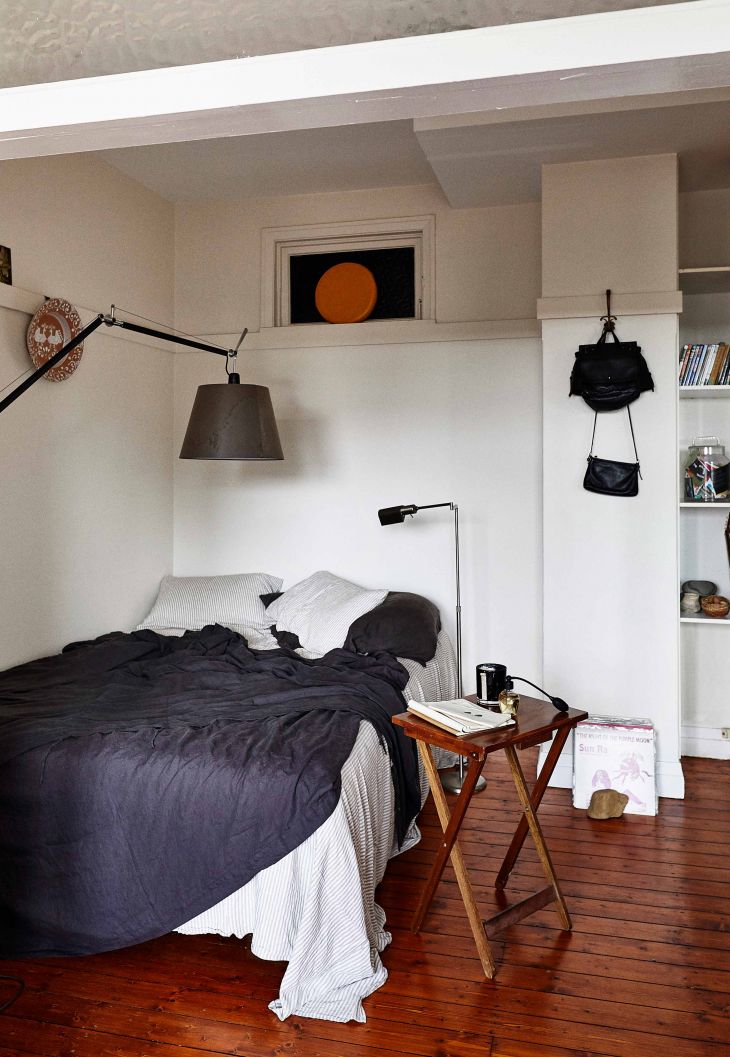 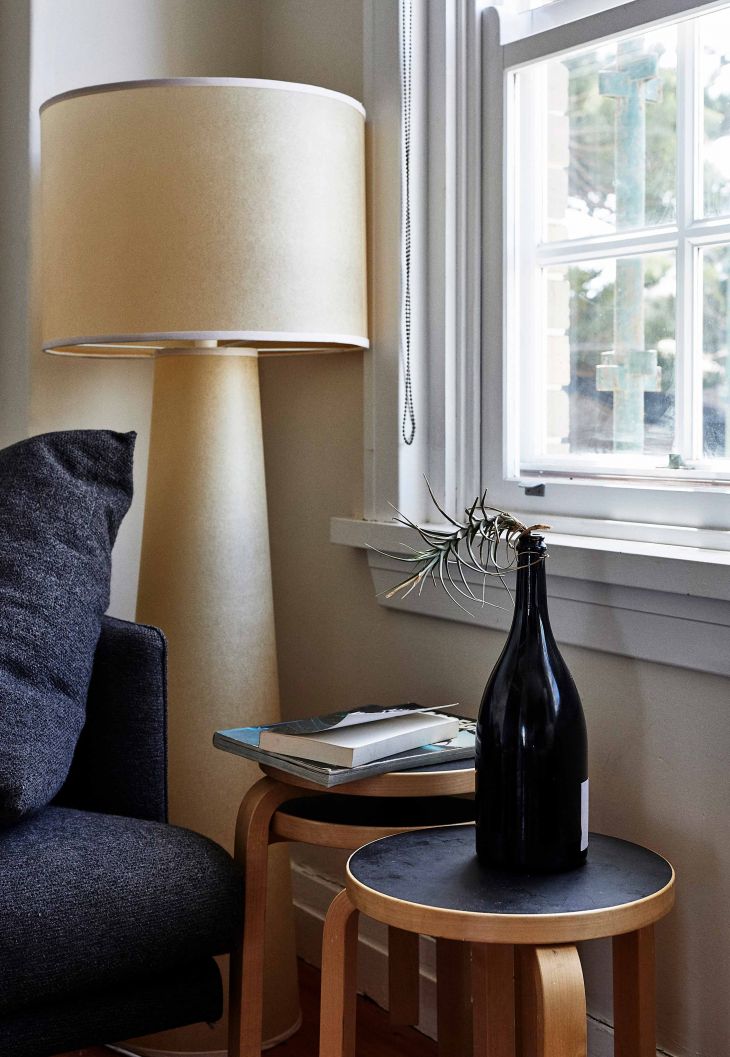 She lives in one of Bondi's first apartment buildings, Berkeley Court. Built in 1927, "it looks like a New York brownstone by the sea. I heard recently that the foyer used to be a ballroom and a place for playing cards. It is grand, worn, beautiful, odd. Photographs in the building's entrance show Bondi in the 1920s and open space meets the sea. The Bondi Pavillion was a turkish bath. A past occupants wedding photo also features on one wall." "The yellow circle above my bed is a vinyl upholstered cushion from my grandparent's outdoor setting. Now, it is the sun." 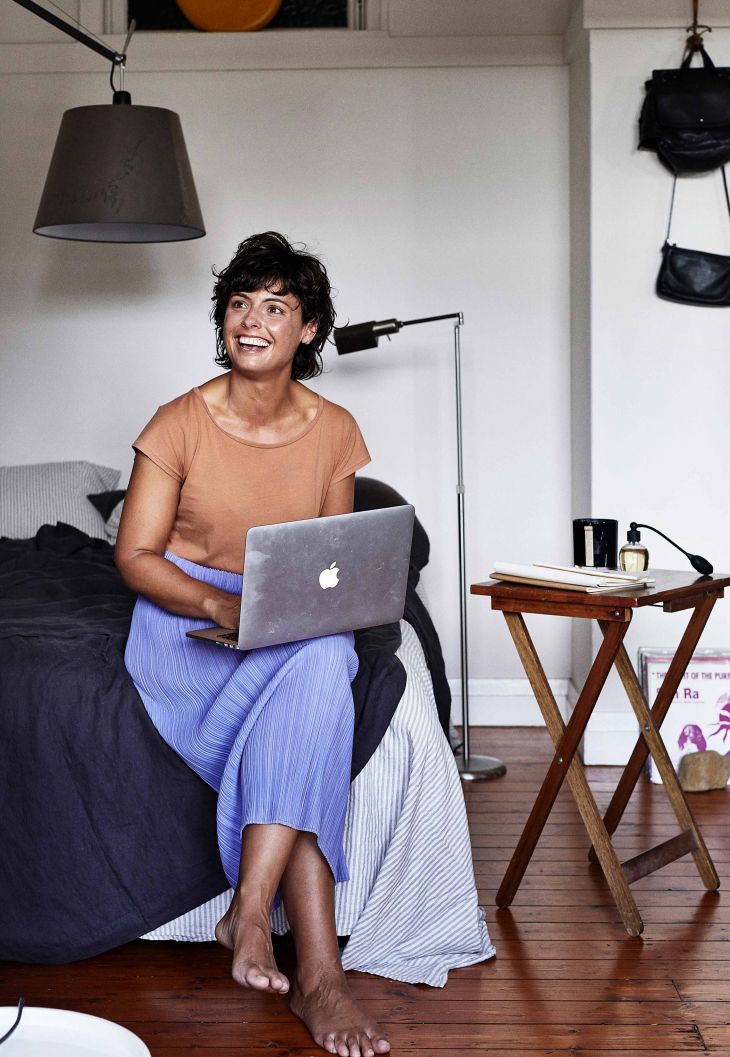 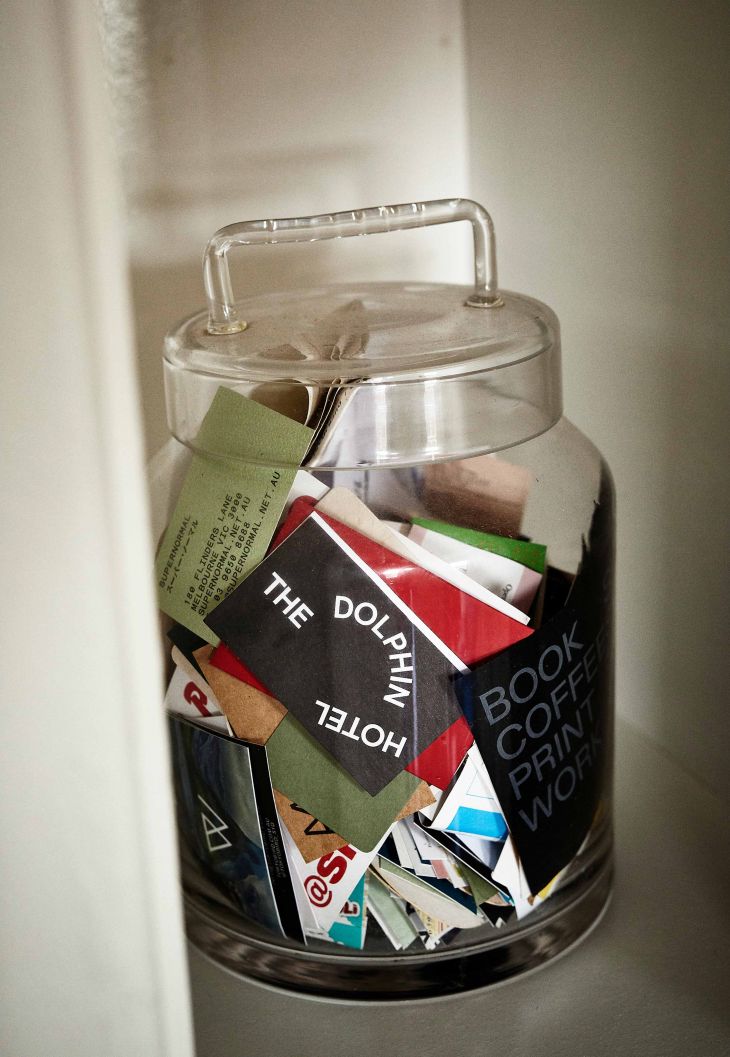 Sarah's business cards collected from memorable meals she's had out with family and friends. 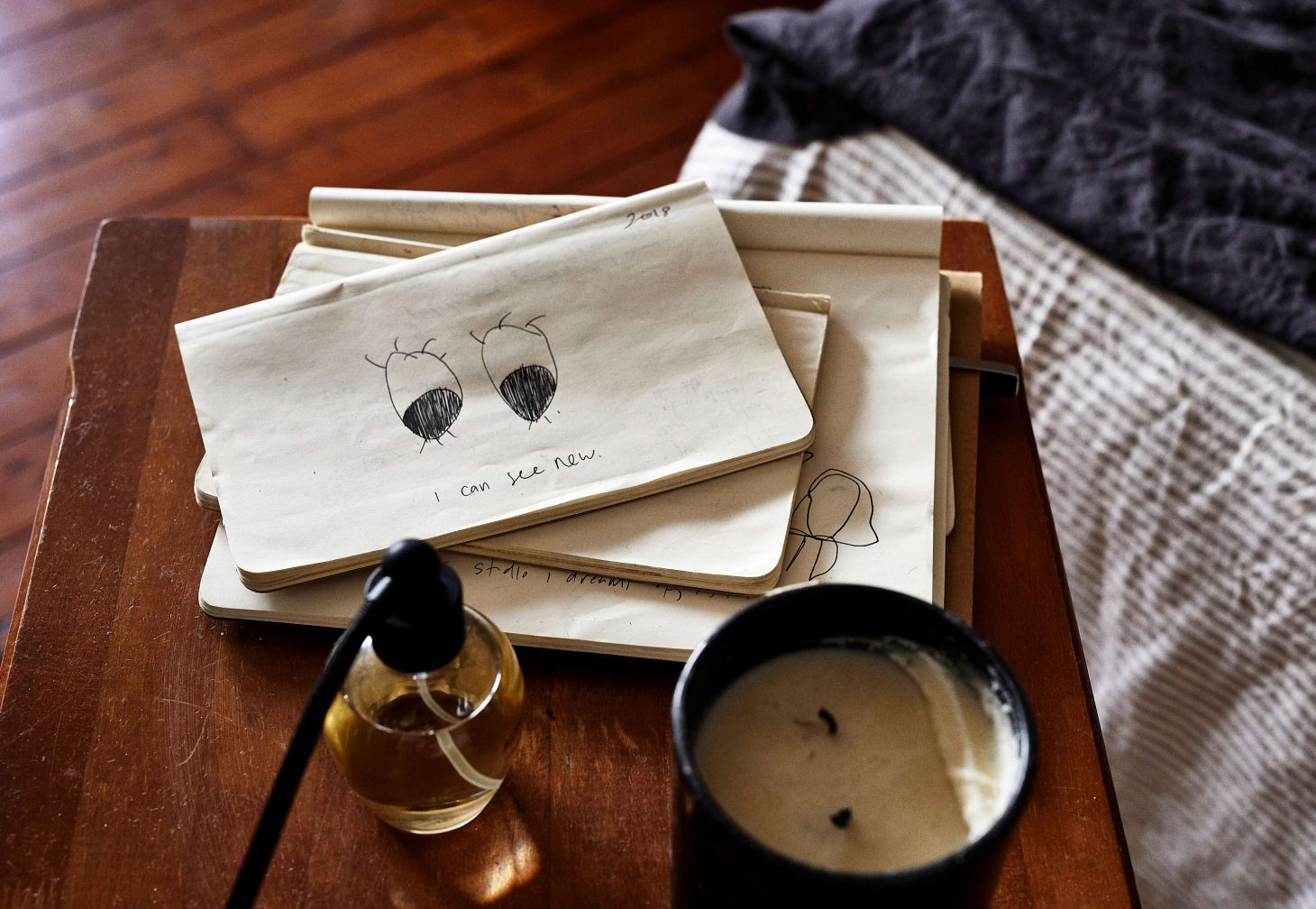 “Living here, so close to the beach has made the small interior of my apartment extend into the sea. Most things are in my home because they have a story -- or perhaps they’re in a story that’s being written right now. I am constantly rearranging the things in my apartment, changing how things work together, seeing what unfolds.” 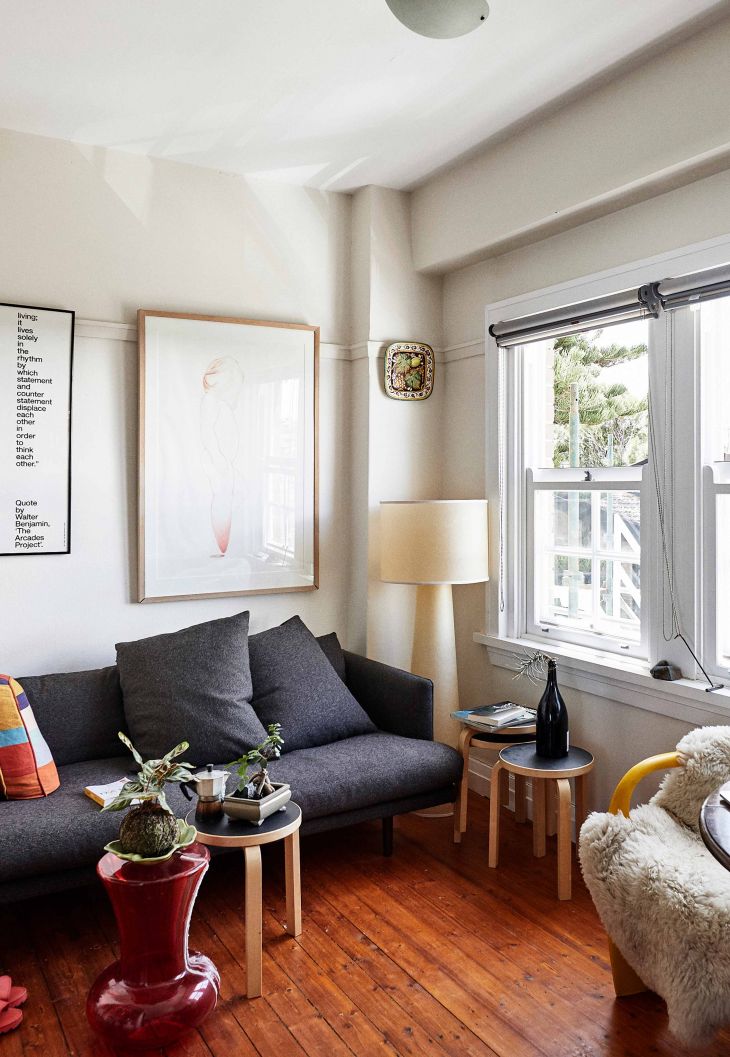 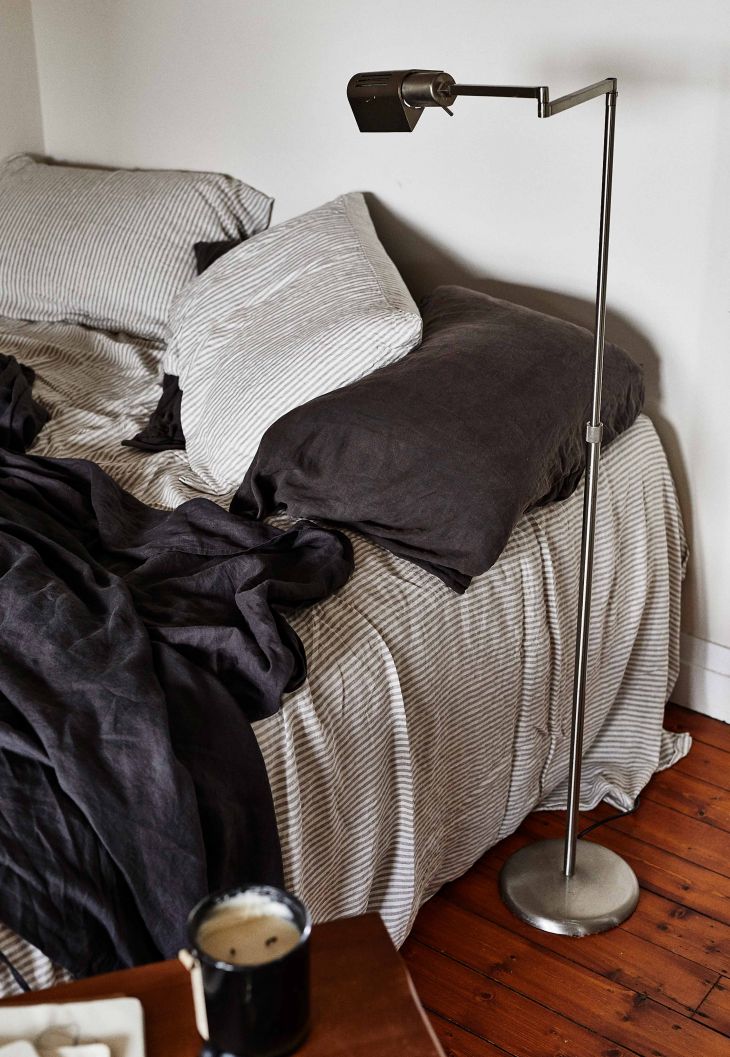 Sarah's bedroom nook, featuring linen sheets in grey & white stripe and a linen duvet in kohl by IN BED

"The stack of Artek birch stools were designed by Alvar Aalto as a seat, however I'm always rearranging them. All stacked up they make a high side table. Interlocked they make a low platform for dining." 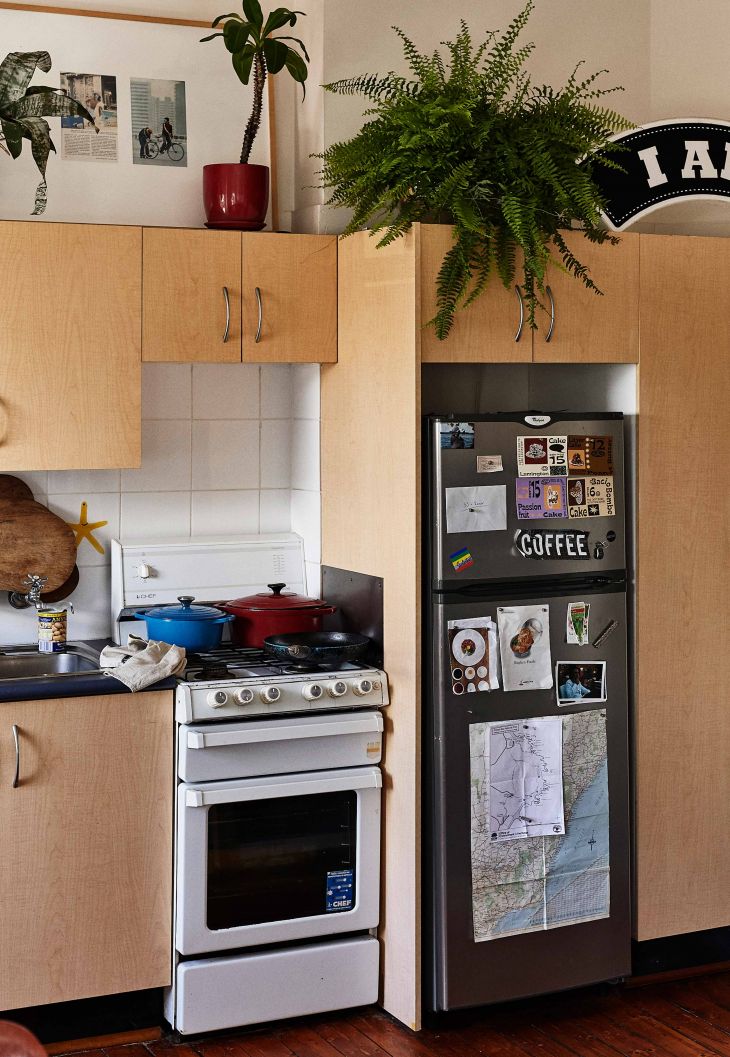 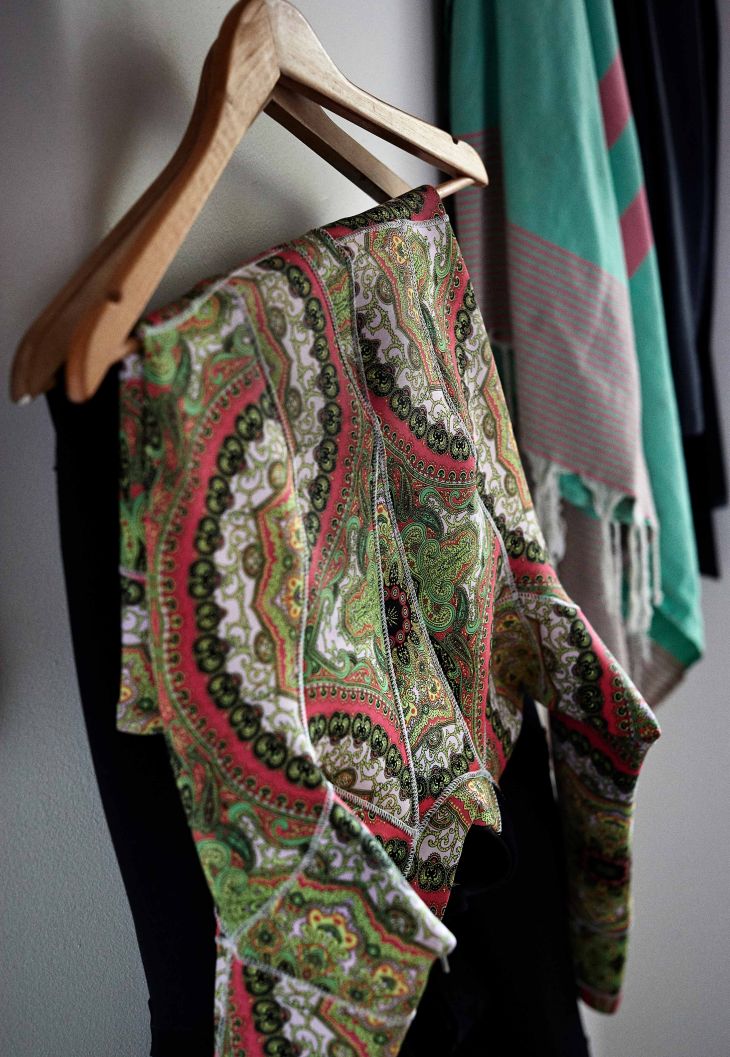 "I was sourcing eclectic furniture for a cafe in a second hand store in Waterloo when I found the sign. I was just struck by it. How the philosophical weight of the words, 'I AM' took on a cartoon cowboy or spaghetti western feel when set in a heavy serif font, cut out of black felt and slapped on a polystyrene backing." "Wetsuits are often black and make you look like a seal, my wetsuit's pretty Paisley pattern makes me look more like some kind of soft furnishing, perhaps a curtain or a pillow--which is probably of less interest to a shark."

Wetsuits are often black and make you look like a seal, my wetsuit's pretty Paisley pattern makes me look more like some kind of soft furnishing, perhaps a curtain or a pillow--which is probably of less interest to a shark. 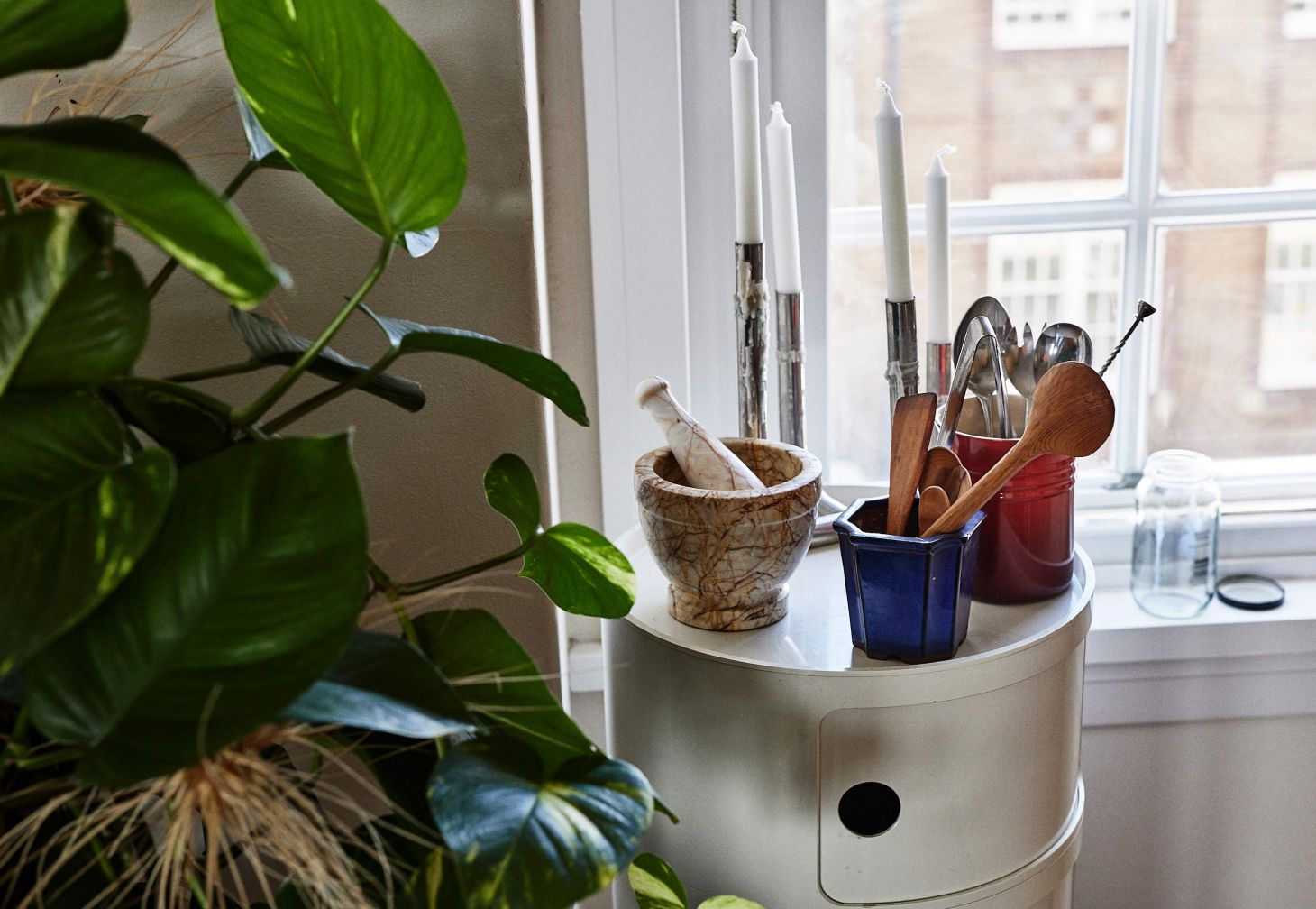 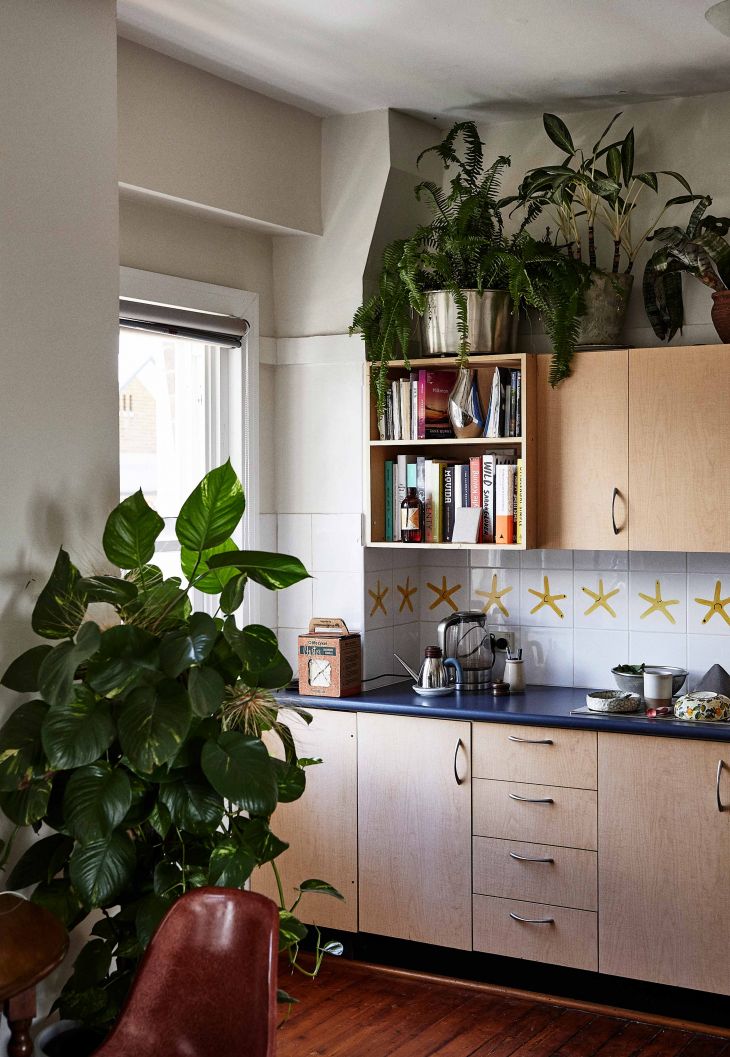 When Sarah moved into the apartment, she was hesitant about the series of starfish someone had painted onto the kitchen tiles. "At first, I was unsure about the starfish--were they tacky? Was there such as thing as '80's beach chic'? Using a whiteboard marker, I added eyes and smiles and by placing them in different positions on each shape, the starfish cartwheel across the wall." Sarah is working on a PhD at RMIT through practice research. "Early in my candidature, I realised that how I surf is resonant with how I design. Going for a surf has become a part of my research process--it's a way of thinking through doing an analogous practice. I started surfing twenty years ago and just can't stop. Being in a wave and moving with it or as some people say, dancing with water is an amazing sensation." She is also working on four of the opening exhibitions for a new museum at The University of Sydney. "I love meeting in the university storerooms, surrounded by amazing objects and artworks from all over the world, all over time. Designing these exhibitions involves exploring that moment of encounter and asking, 'what can happen when people meet things?'". 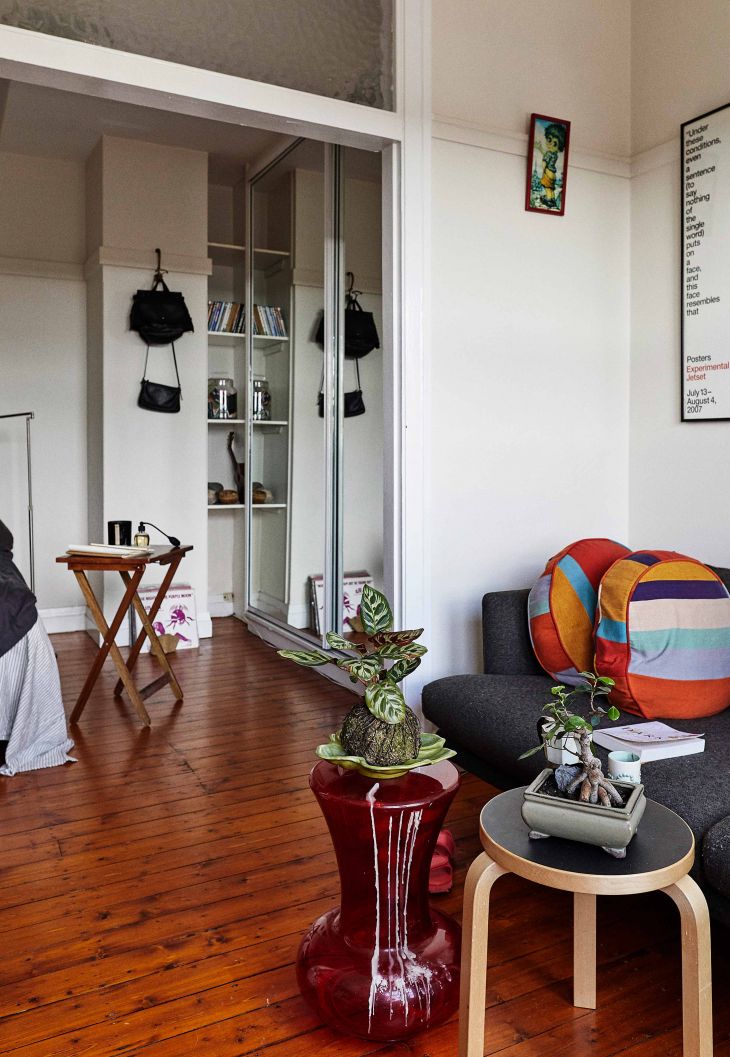 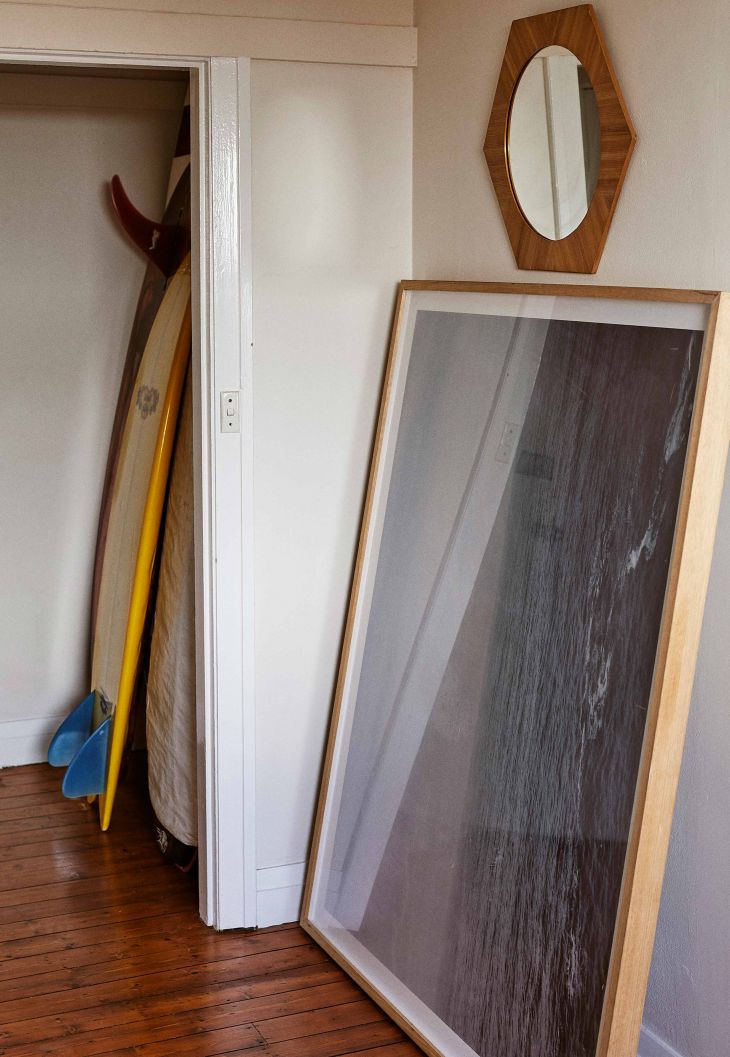 [clear] "The red plastic stool was made by Kartell, designed by Philippe Starck and then, I lit a candle and let the wax drip down its smooth curves. I like how the lines of beeswax accentuate its bulbous form." "The photograph of the horizon was given to me by an inspiring woman, who wore stilettos whilst catching the bus. Age 90. I like to rest the large frame on its side, to make the horizon run vertical. A new orientation. It reminds me to stay open, to see and do things differently."

I like to rest the large frame on its side, to make the horizon run vertical. A new orientation. It reminds me to stay open, to see and do things differently. 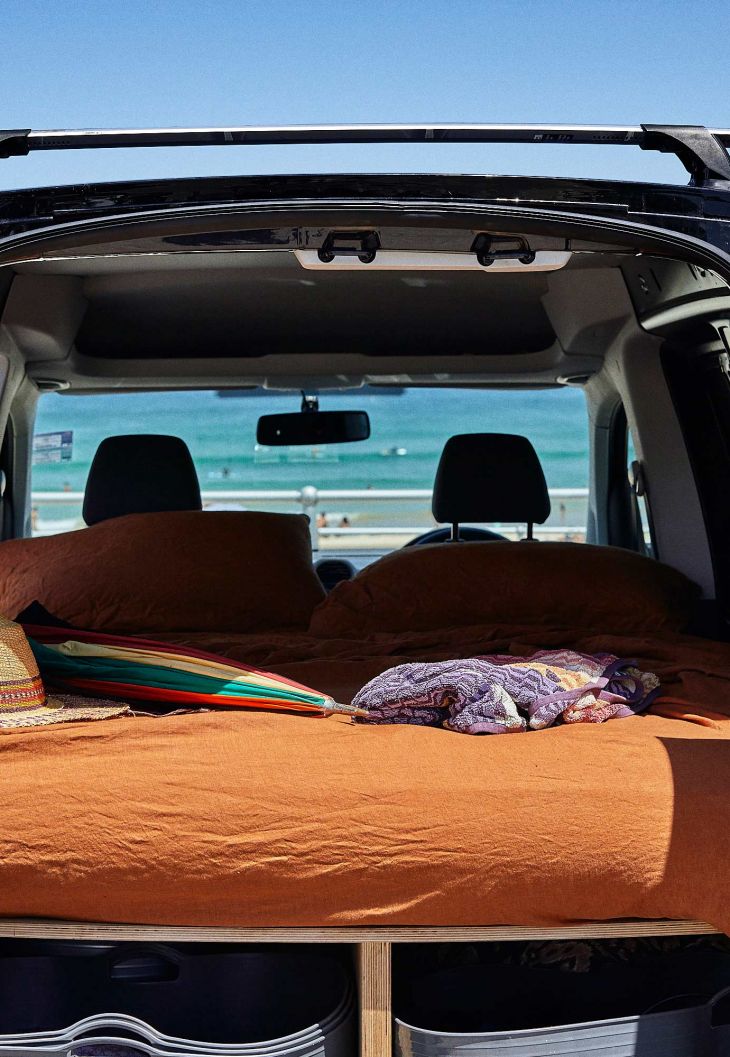 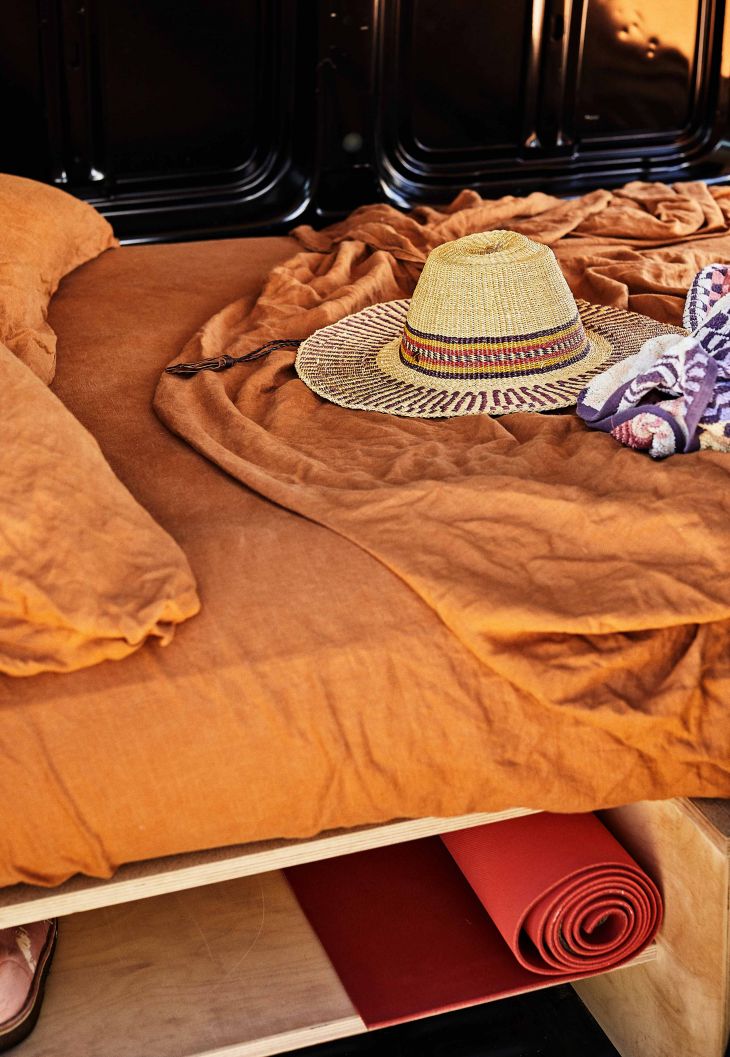 Sarah's van, decked out in tobacco sheets by IN BED.

Sarah's van, parked at North Bondi Beach and ready for its next adventure. "A few years ago I designed a simple plywood platform that inserted a double bed, bookshelf and storage area into a standard delivery van. A runabout___holiday___house. My boyfriend and I have just come back from an impromptu weekend at The Farm, a national surfing reserve south of Sydney. Right now, we have our eye on a weekend at Seal Rocks and a trip to the Kangaroo Valley to see some waterfalls, a caravan pizzeria and our friend. The fun of the van is not needing to plan, beyond packing the oyster knife, aeropress______and all the surfboards. " www.catseyebay.com @catseyebay
two hundred and seventy-two

The Meadows by Merchant Road

The Meadows: a feast in a field, was the first of a series of dinners that our friends at Merchant Road are running in beautiful outdoor settings across Victoria.