Nestled in the quiet of Topanga Canyon, Mike and Charlotte Beavers are living at their own pace. With a recent move from San Francisco, the couple have built their home from the ground up. With an unknown history to the land, Mike, a woodworker has transformed the rough foundation into their ideal cabin. Charlotte spends her days painting watercolours of the ever-changing canyon landscape. 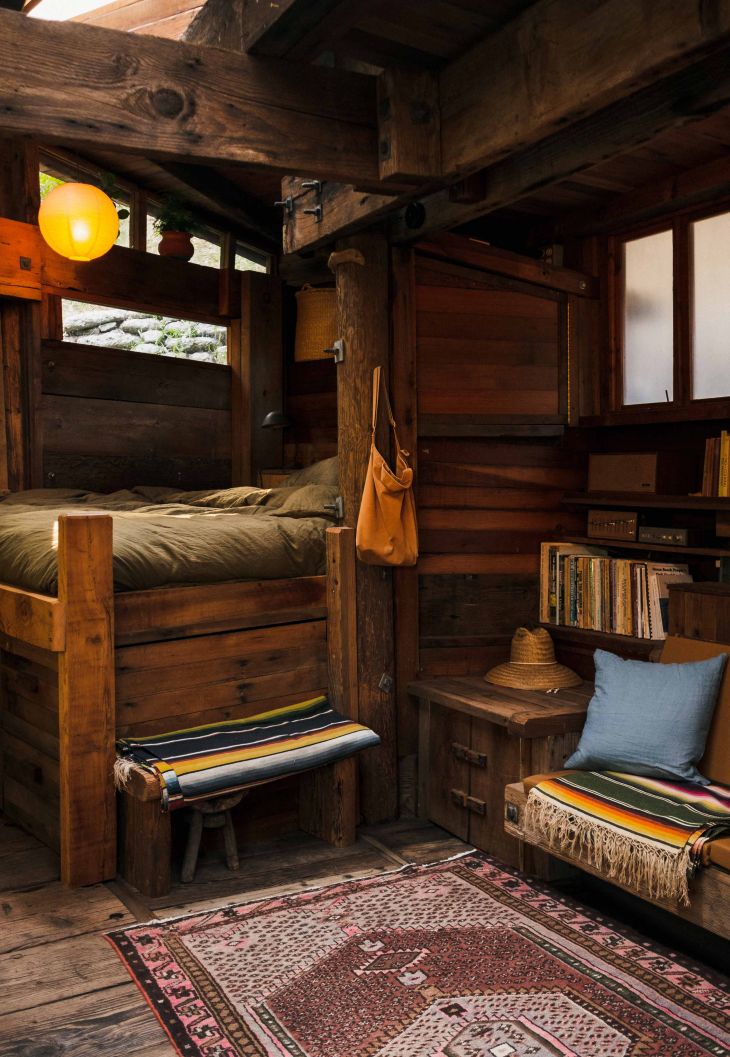 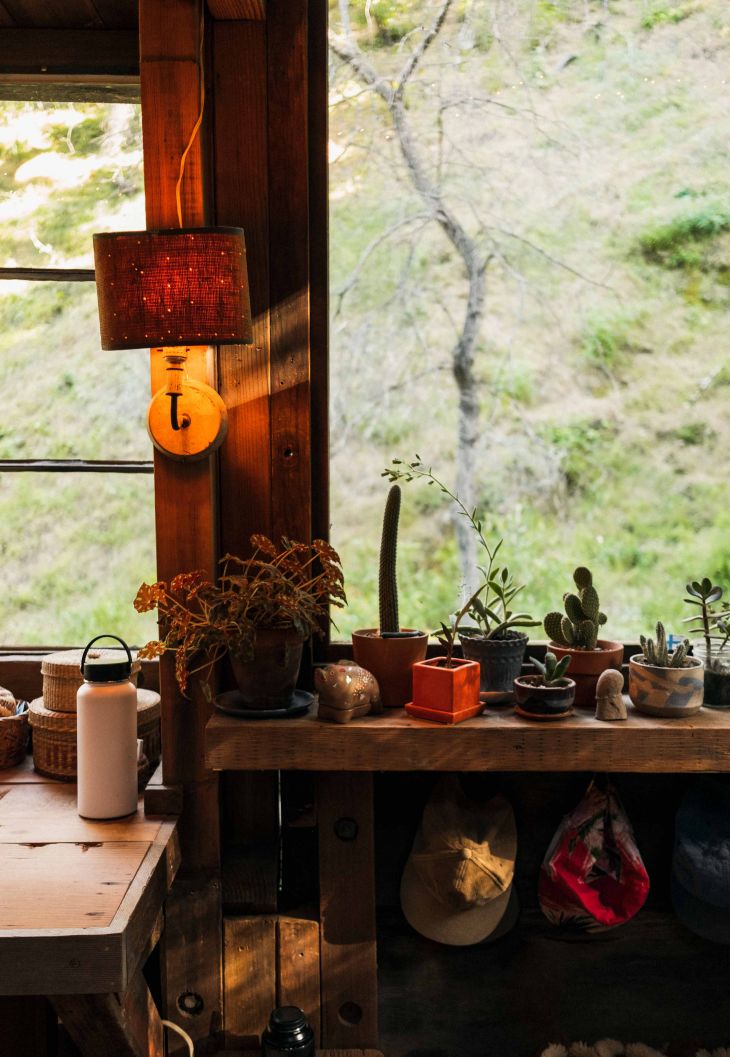 "We lived in a house on the property for a couple of years, waiting for the right time to build. It gave me a lot of time to spend in the space and create a mental inventory of our possessions, what we actually used and needed. So, it's designed for a simple version of how we tend to live, which is cool and creates interesting checks on accumulating things."

It's designed for a simple version of how we tend to live, which is cool and creates interesting checks on accumulating things. 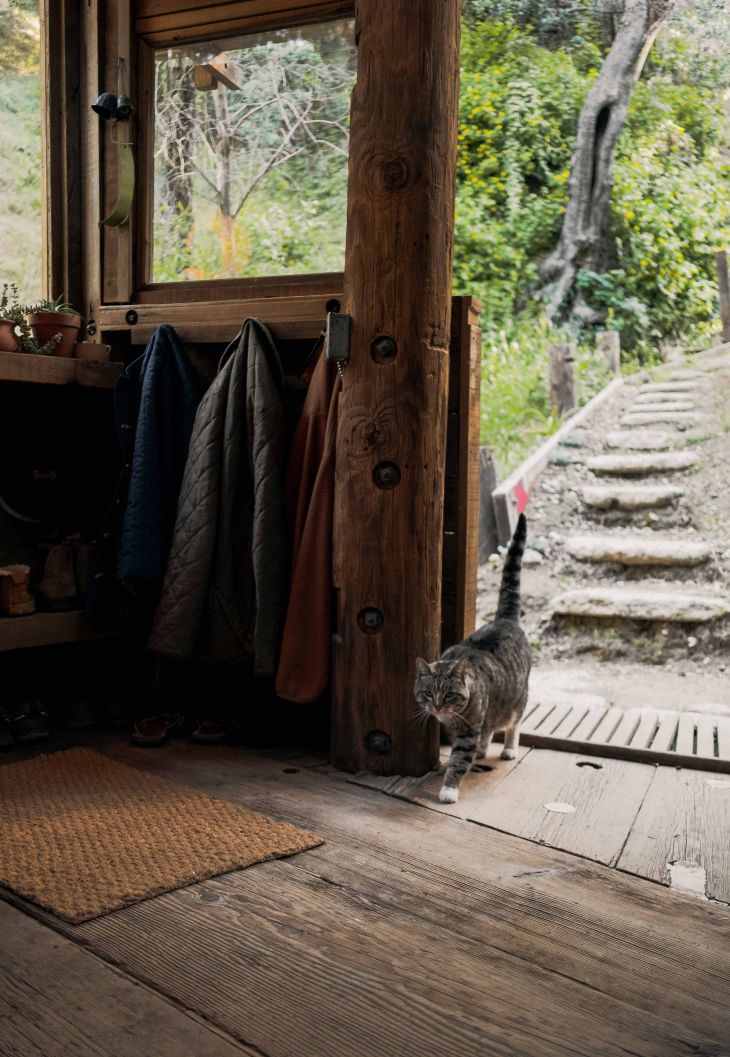 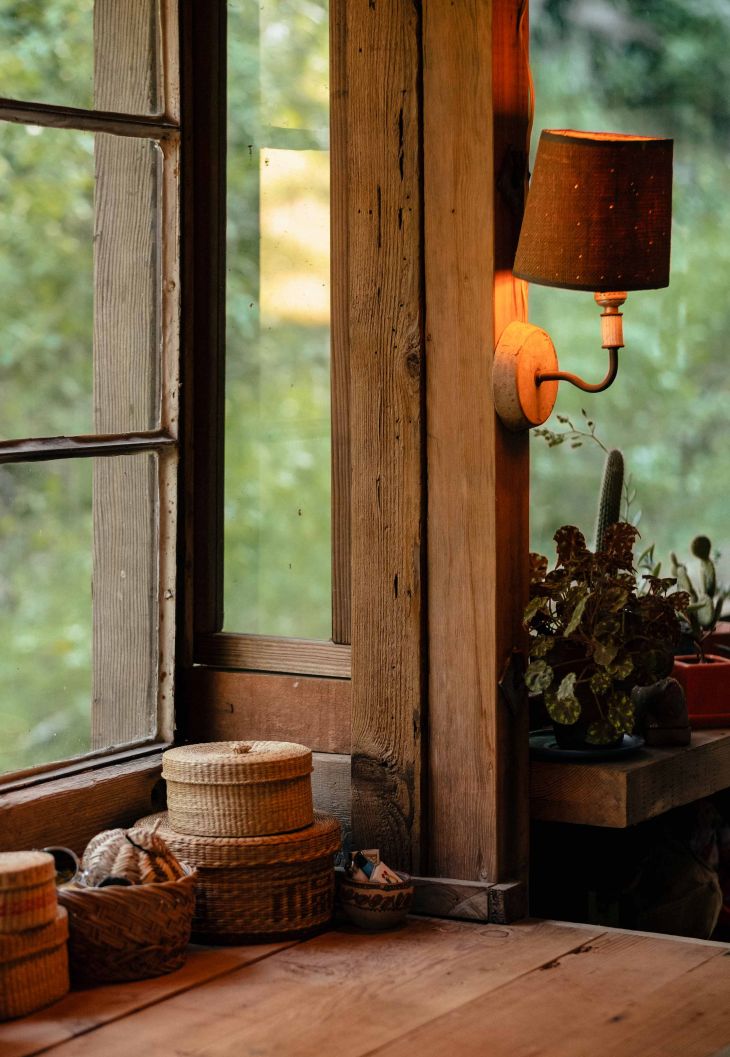 "I worked at a wood shop in San Francisco and started my own thing when we moved down here, which was really a big change. Rather than working in the wood factory making the same things every day, it's empowering to have agency over what comes next. Topanga offered such a soft landing into "LA," which it feels close to but is such a world away from. Really, just waking up here is the best part. The birds in the morning, watching the light change with the seasons. Developing a deeper understanding of the little hill where we live. And seeing Charlotte thrive here. I often notice her stopped in the middle of the path looking at plants or birds or whatever else might be buzzing around. We didn't know how not city people we were until we were here."

It's empowering to have agency over what comes next. 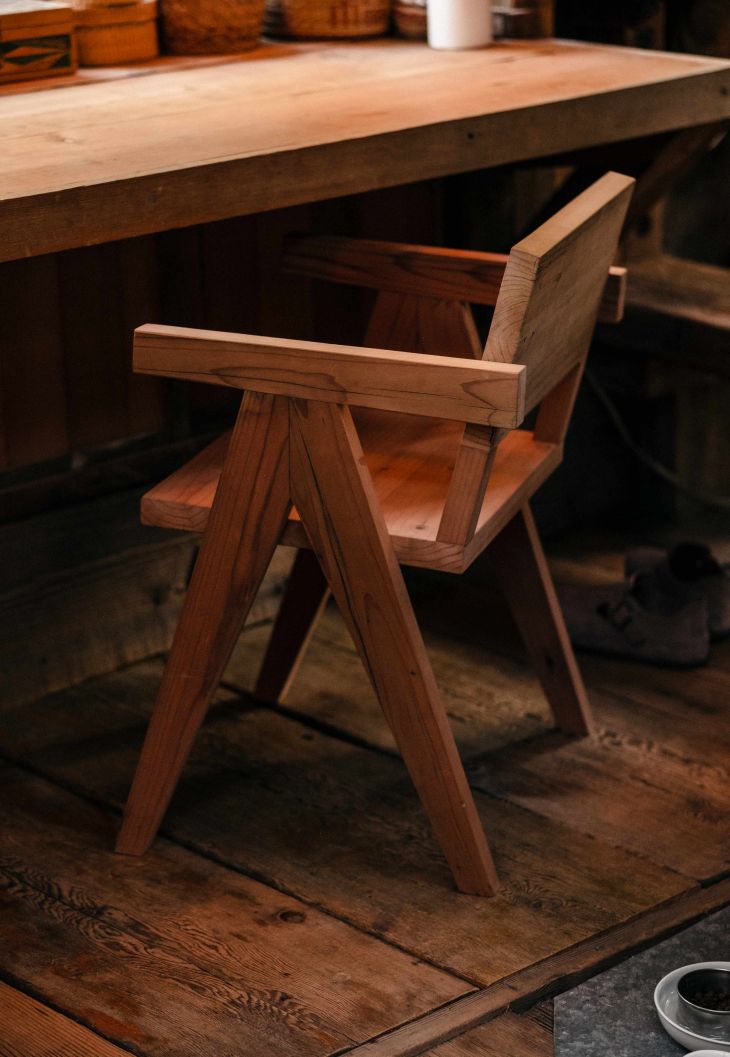 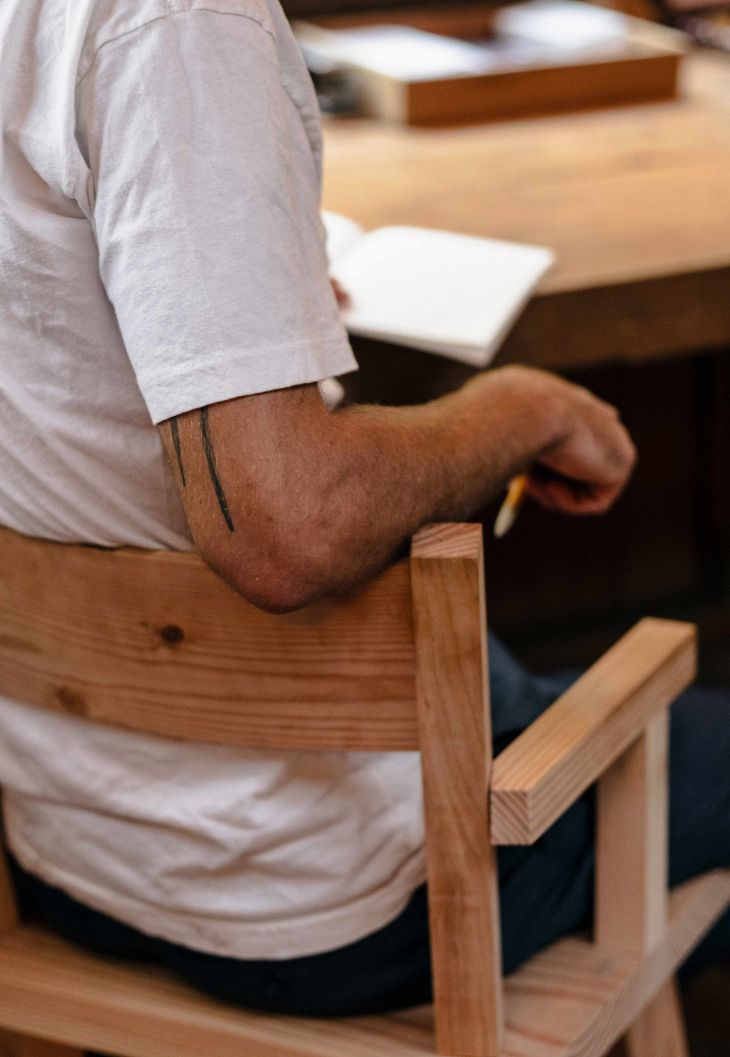 The furniture-making process has become collaborative between Mike and Charlotte.

"I told Charlotte that I would someday make chairs for us, though was intimidated by it. But she held me to it and it turned out to be really fun. So, those first two chairs were made out of scrap lumber. I built the sofa roughly using the angles of a friend's sofa that I liked. We bought some foam and Charlotte made the cushions. Our place is pretty small, so the built in sofa seemed like a good move for max use of space." 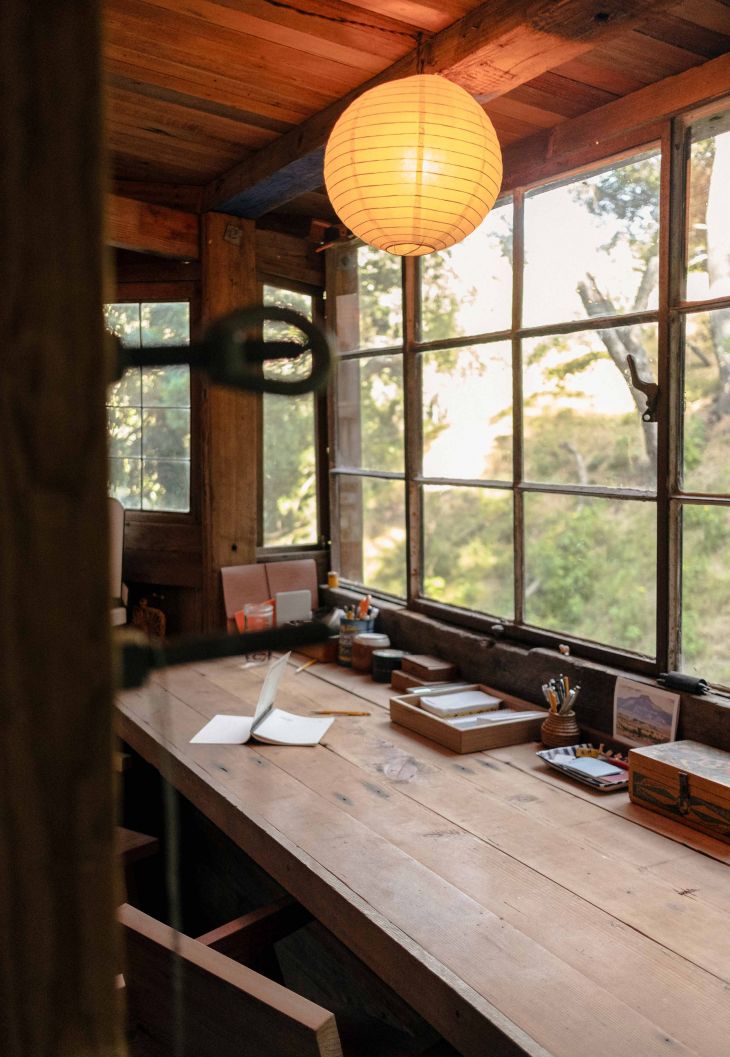 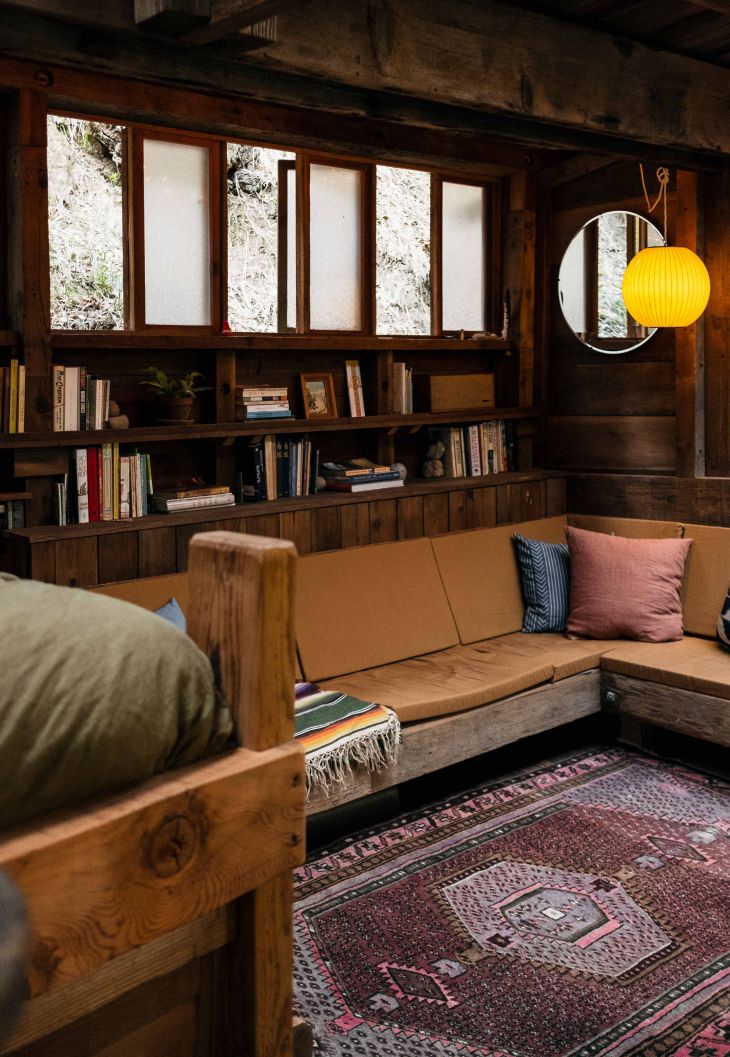 "I had spent the years leading up to the project scavenging/accumulating some materials that I really liked. The process sort of peaked with these piles of materials that felt good and potentially useful surrounding the path to the building. I would build a section of what I imagined for the place and then step back, consider the next step and move forward based on what supplies felt best for that. So it was somewhat driven by materials on hand." 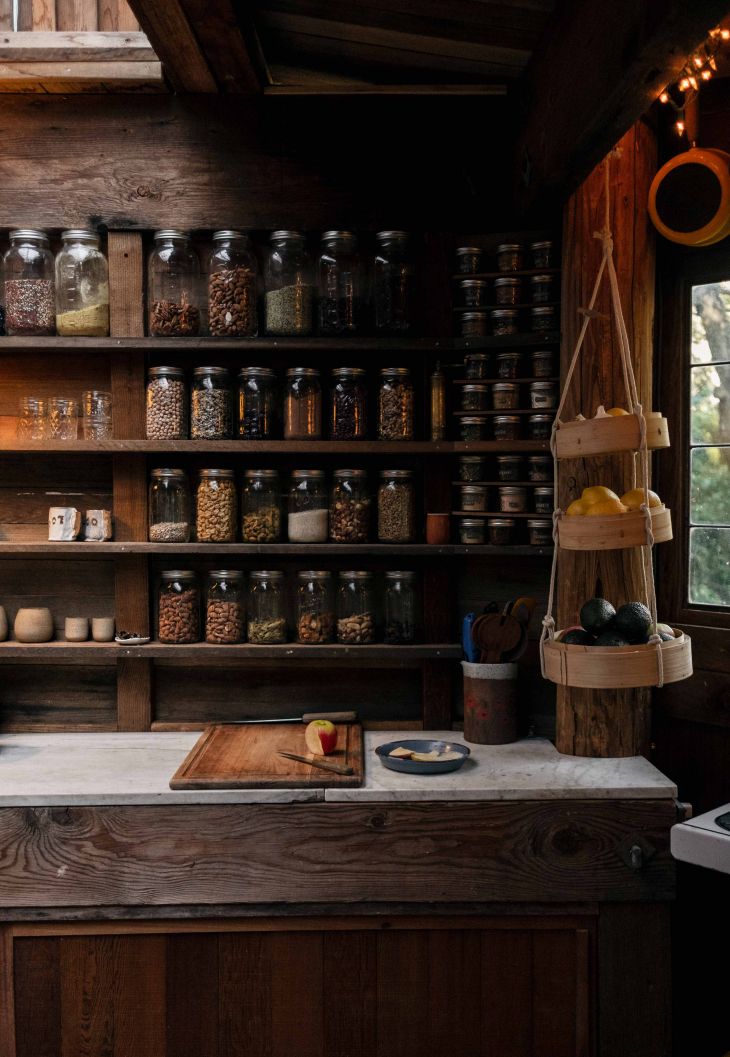 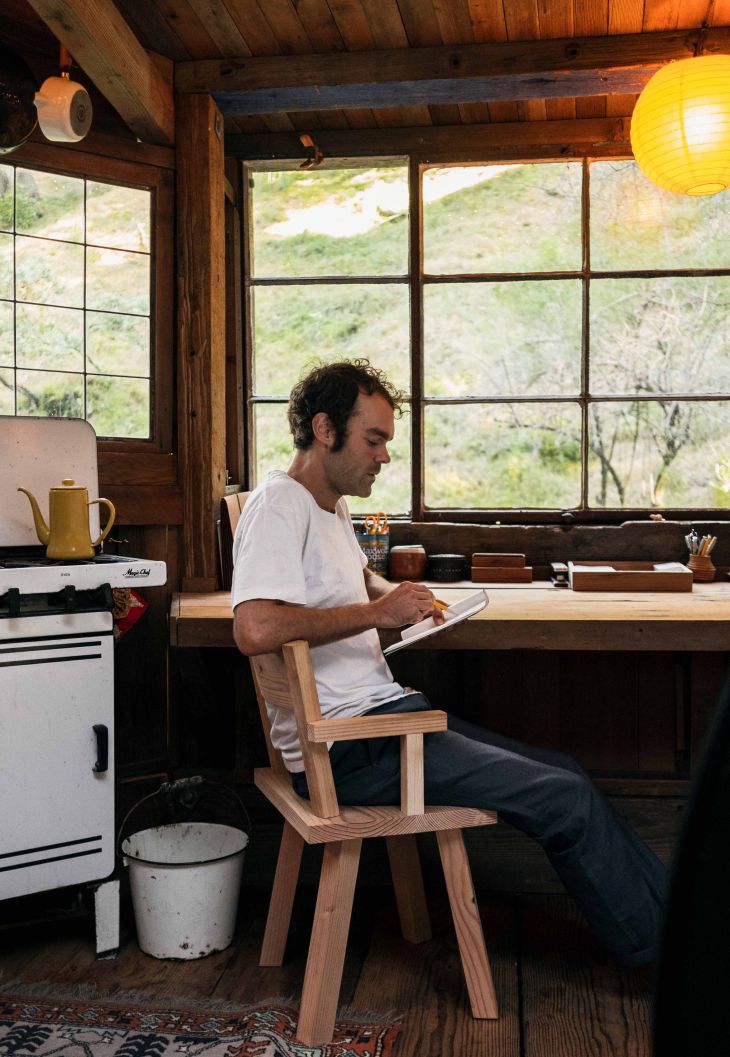 While listening to live Grateful Dead shows, Mike relies mainly on his intuition, materials and process as his source of design inspiration.

"I can sketch something up, but it always feels different when looking at the actual materials in that shape. I can't imagine drawing a picture of something and having someone else build it. That would likely come out looking and feeling super disconnected." 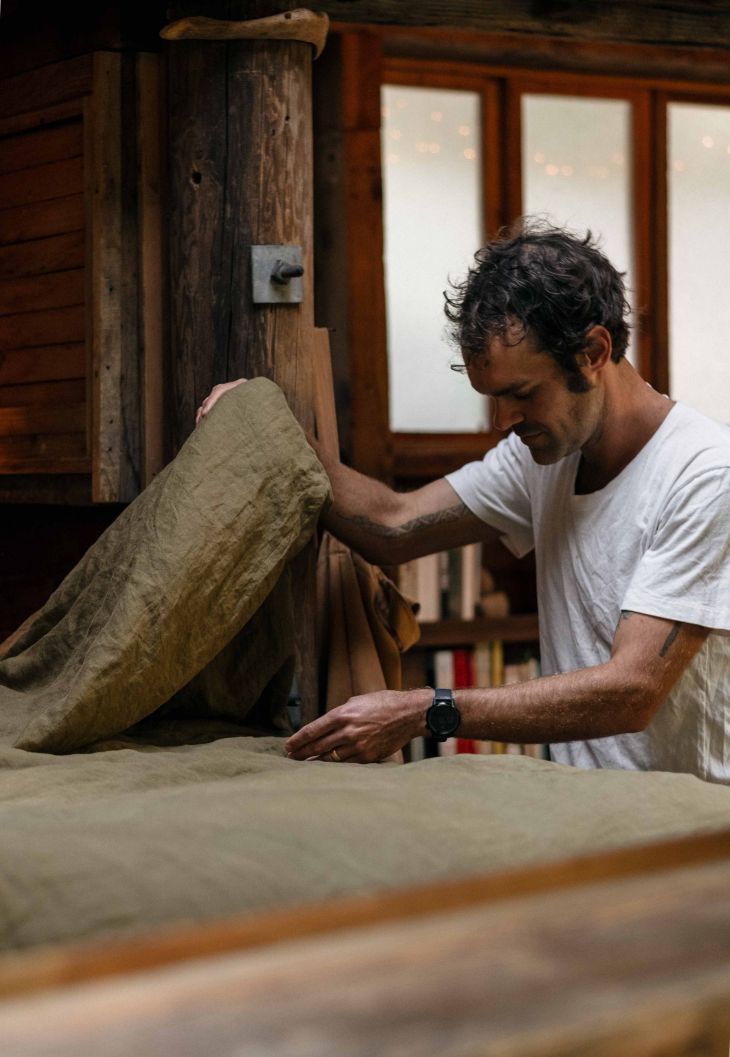 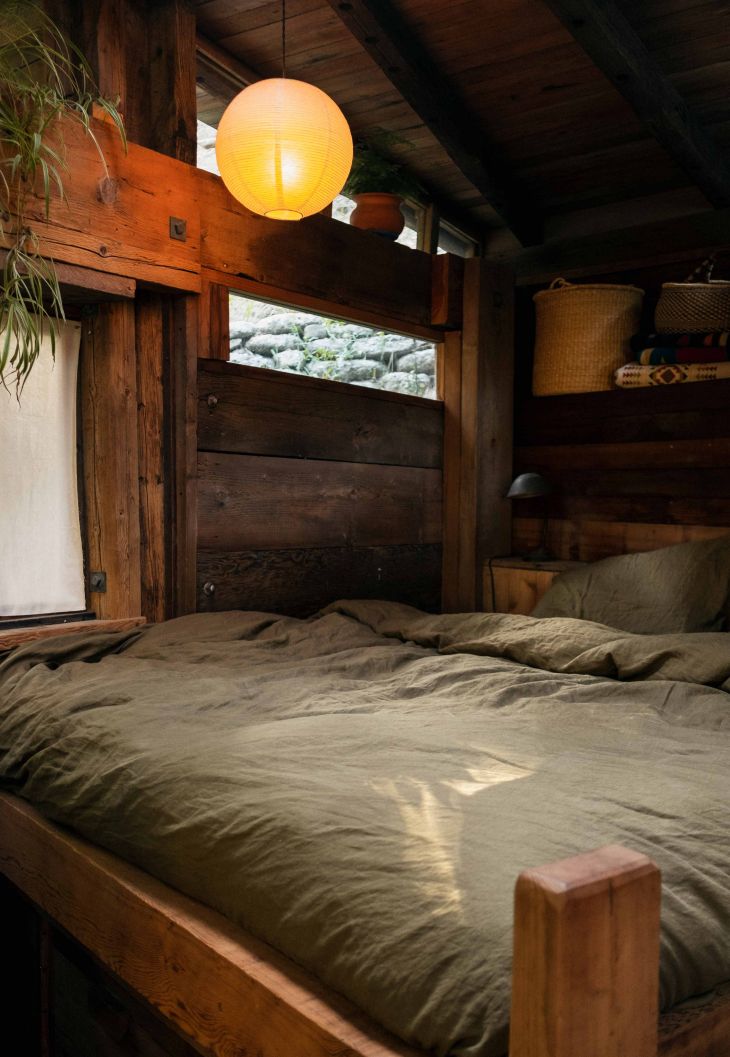 "Our friend Linton gave us a rug when we moved in and it's pretty special. We had tried to find a good rug and failed, then Linton came down with the raddest one. It was one of those things we couldn't figure out and then it was presented to us instead." 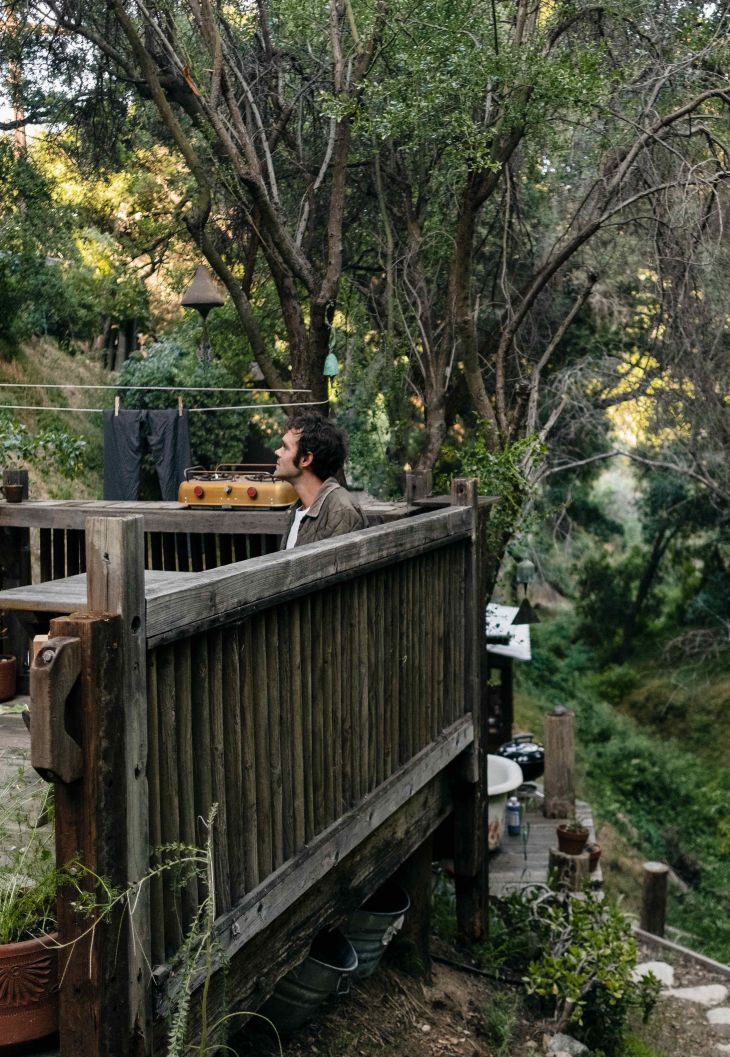 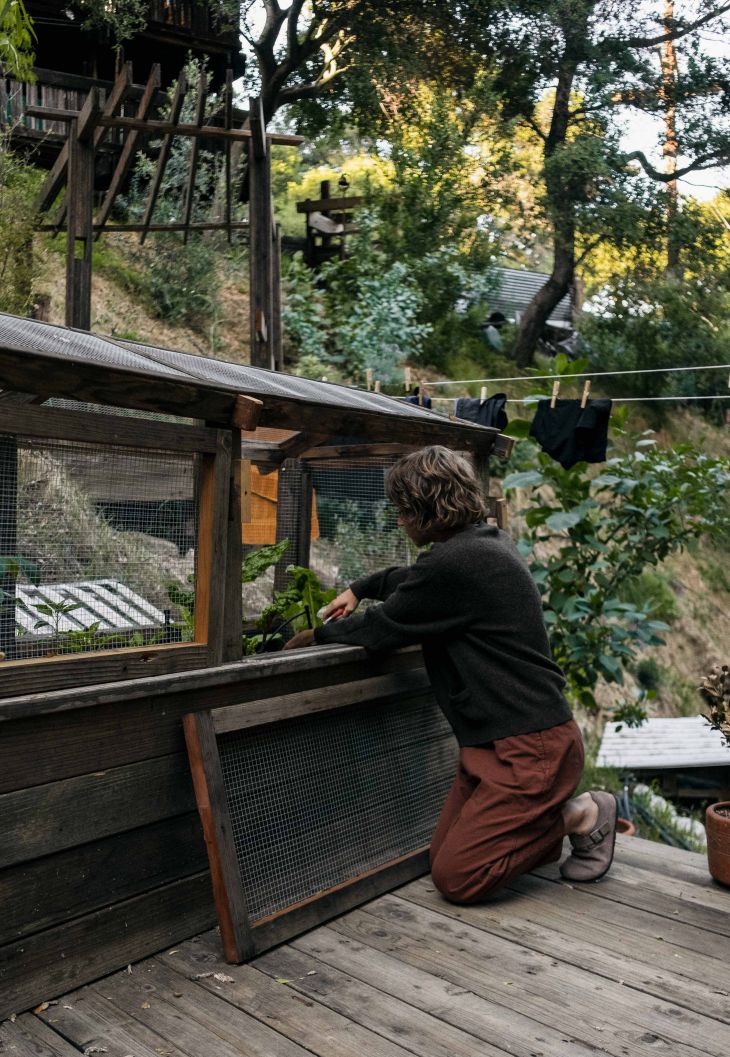 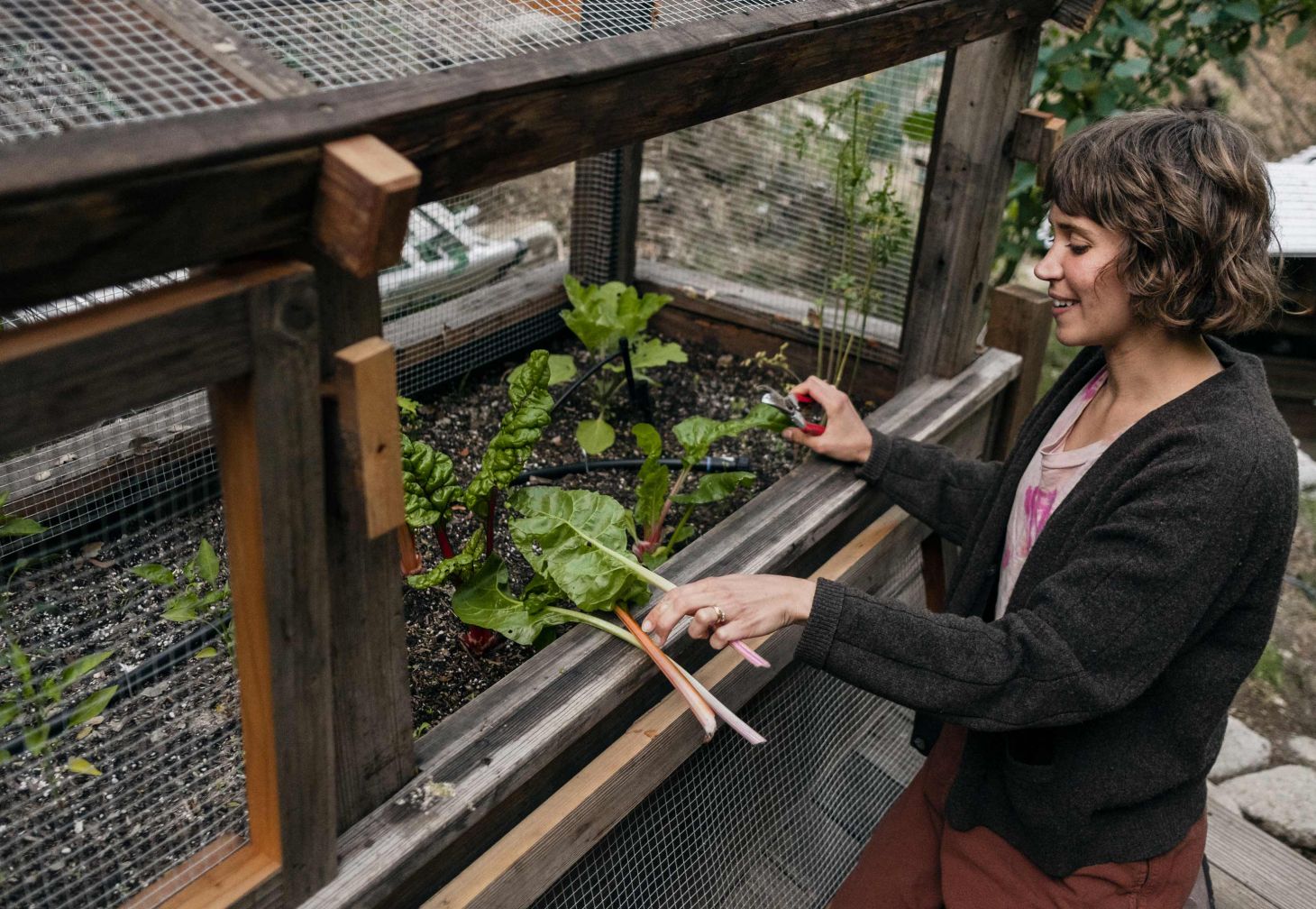 The couple has created rituals around their daily meals.

"Since we're both around most of the time, we tend to be able to have lunch and coffee together. I feel really lucky that we can have that time and check in with each other in the middle of the day. Recently, we've been getting up and going for early morning runs that have provided a huge shift for the better on most things. Spending time running slow, watching the day begin, just breathing and moving my feet puts the day on a positive course. In a couple of weeks, I'm running a marathon and Charlotte is doing the half marathon." 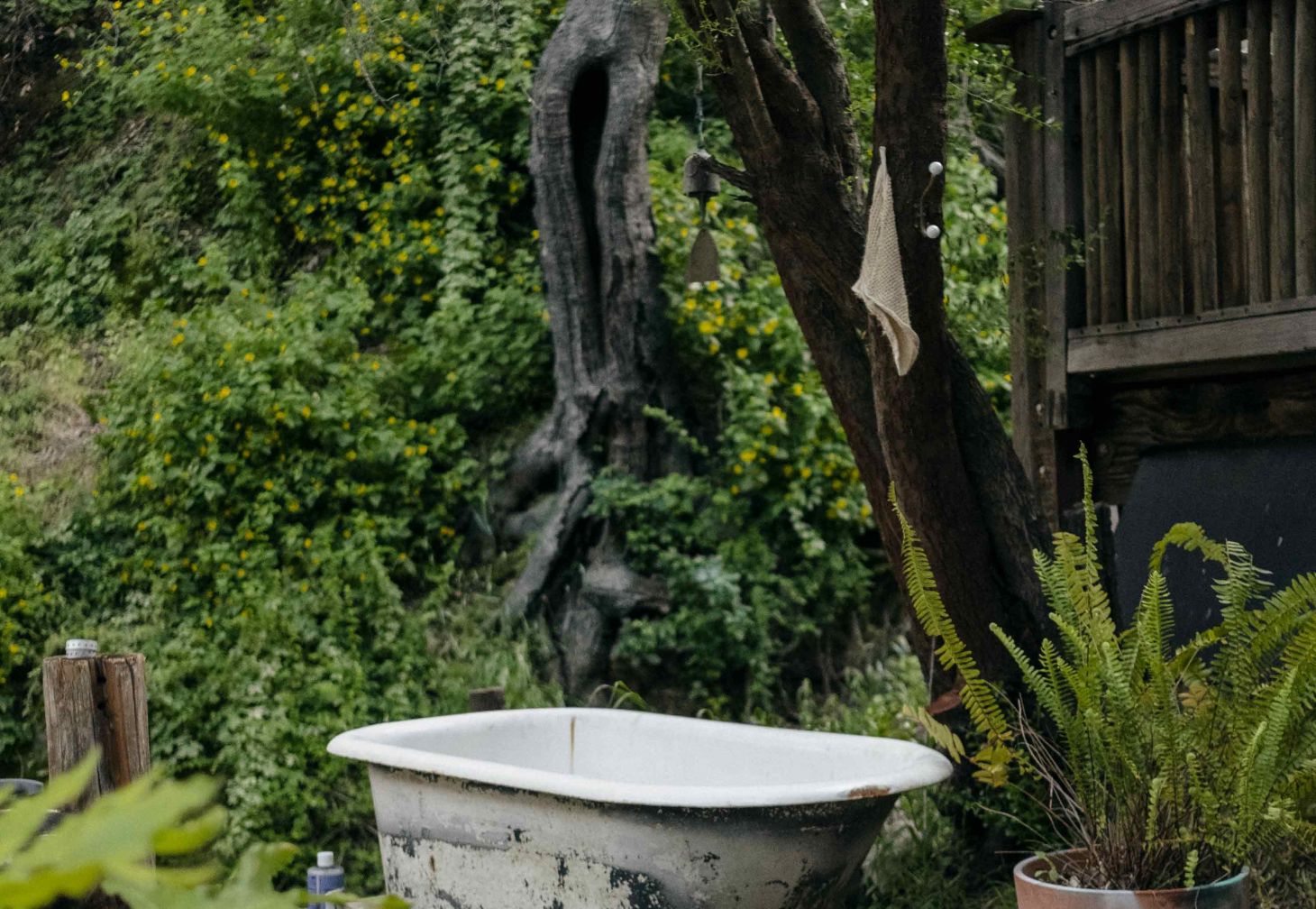 "Charlotte and I are having a little pop up show of her watercolors and my chairs in San Francisco at the end of June. It's fun to have a reason to experiment with that. I'm also slowly chipping away at a little studio for her just up the hill from our place." Mike, on what is both over, and underrated. "The ladder of achievement is overrated. It's a struggle to feel good about what you're doing when always looking ahead to something 'better.' On the flipside, personal finance bookkeeping is underrated! Why don't they teach this in school? It feels to me like one of the keys to freedom." @beaviebaby @chrlybrwn
two hundred and eighty-nine

We share a gallery of images and the menu from our recent dinner with friends in Melbourne.

We visit the Rye beachhouse of Elise Heslop, Director of furniture brand, Plyroom.